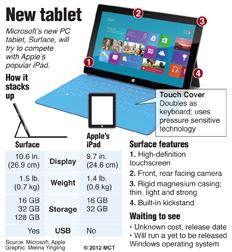 Although the iPad gets the most attention when it comes to tablets, there are many other tablets available, by companies including Samsung, Windows, and Amazon. One such tablet is called the Windows Surface.

You have probably seen commercials for the Surface, but in case you don’t actually know much about it, here is some information.

Weighing in at 1.5 pounds and costing $499, the Windows Surface has a 10.6 inch screen, on which you can play games, browse the internet, play music, and do any work that you may need to do. But none of that differs too much from the iPad, or most other tablets.

The Windows Surface is different because it comes with a built in kickstand that you can use to prop up the Surface if you want to use it more like a computer. It also comes with one of two different types of keyboard covers that each come in a variety of different colors.

The Touch cover is a pressure sensitive keyboard cover that rolls out and can be used alongside the touch screen. The other option is the Type Cover for a more traditional typing experience, featuring a mechanical keyboard with pressable keys. On the Surface, you can also use two apps at the same time.

Since it’s release on October 26, the Surface has received mixed reviews.

Many people seem to enjoy the previously mentioned built-in kickstand, the keyboard covers, the stylish look, and the crisp screen of the Surface, despite a comparably low resolution. The Surface has also received good reviews about its USB port, which makes it easier to download and share pictures from the Surface.

Also, you are able to uninstall almost any application that you want that comes pre-installed on the Surface, unlike the iPad with which you cannot get rid of the preloaded applications.

Some negative reviews of the Surface have included poor speakers, a bad quality rear-facing camera, the occasionally unresponsive Windows button, and a lack of apps available for download.