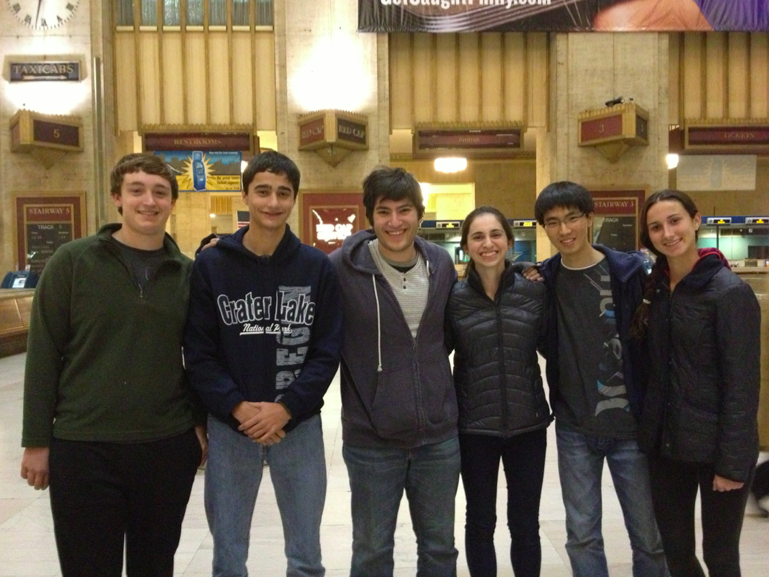 It was the first time that Harriton had sent a team to the tournament. The team members are all students in Harriton’s senior seminar math class, a post-calculus course, covering undergraduate math topics including  game theory, multivariable calculus, and vectors. For the weeks prior to the tournament, the class spent class time doing practice problems from prior HMMT competitions. Mr. Occhiogrosso, their teacher, also accompanied them on the journey.

The tournament consisted of four rounds, two individual, one team, and one ‘guts’ round. The individual and team rounds were 50 and 60 minutes long, respectively with 10 questions each. During the ‘guts’ round, all participating teams, about 120 in total, were gathered in the same lecture hall and tasked to complete as many problems as possible in 80 minutes. Problems were given in sets of three, and teams could not move on to the next problem set until the prior one was completed. Scores were posted in realtime to heighten the anxiety in the room.

As the tournament was entirely student-run, all problems were written by undergraduates at either MIT or Harvard College. Every problem could be solved without calculus, yet by no means did that make them more straightforward; students remarked that the problems were extremely difficult. To make the tournament even more challenging, calculators were prohibited. “The experience made me realize that using a calculator all the time has hindered my mental capabilities,” Won Chung observes.

Though Harriton did not place in the tournament, students remark that it was a fun and worthwhile experience overall. Friday, the team members were able to sit in on a multivariable calculus class at MIT, and that night they had the opportunity to explore Boston. “I thought the class was very interesting, because we were exposed to  topics that were surprisingly not too difficult to understand. Also, beyond the math that we learned in the session, it was cool to see what a typical college class is like,” Charlie Rowe recalls.

Will Harriton return to this tournament next year? “Hopefully,” remarks Mr. O. “The tournament allowed some of Harriton’s best math students to compete against some of the absolute best talent in the world. We were able to try our hand at problems in an atmosphere that we rarely get to see.”

Mr. O already has plans to involve high-level mathematics students in other tournaments. “[Competing in HMMT] has already motivated me to seek out and/or create local competitions. I’m excited from our work in the competition and hopefully the students are as well.”

To see examples of the types of problems at HMMT, check out prior years’ problems here.