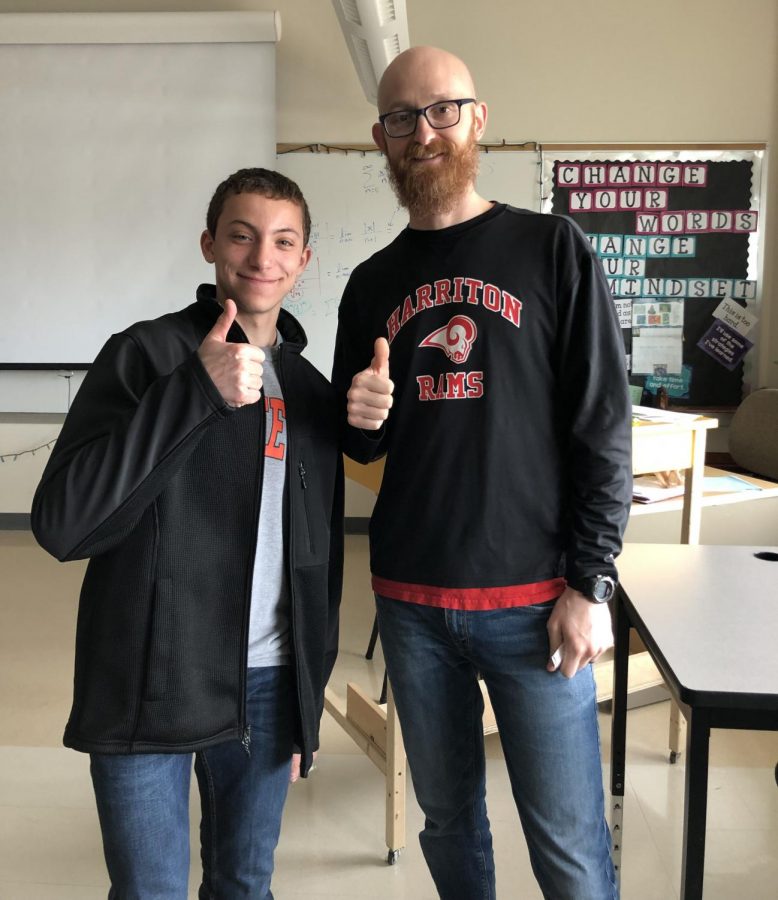 Mr. Occhiogrosso with the writer.

Promposals are a traditional aspect of high school. At Harriton, it is common to observe one student asking another student to prom extravagantly, whether it be through posters or other creative methods of showing “affection.”

However, the question always arises as to why people do such outlandish acts to ask someone to prom. To solve this question and gain insight on the nature of promposals, I sat down with two teachers that have strong opinions as to why juniors and seniors do them.

The first teaches BC Calculus and Senior Seminar in Mathematics, classes full of potential senior victims of promposing. According to Mr. Occhiogrosso, promposals are horrible acts of self-aggrandizing foolishness. People who feel the need to put on a show for others perform these acts of tomfoolery; these people feel the need to impress others.

The conversation with Mr. Occhiogrosso continues onward, revealing more about these imposters I once believed to be guys who were just trying to impress a girl. Mr. Occhiogrosso continues on to state how promposals are not done to honor someone; instead, they are done to put the person in a predicament; if the person rejects the “promposer” in public eyes, then they appear to be the cruel one.

Since asking someone to prom is an indefinite request, one should ask someone in private to see if they agree to going, without the extra added pressures of their peers. Mr. Occhiogrosso also believes social media is intertwined with the whole promposal scene.

Even if couples do it, it is still obnoxious and is comparable to couples making out or cuddling on the courtyard in front of everyone. Additionally, boys sometimes feel obliged to do it for their significant other out of guilt or outside pressures. In order to avoid this debacle of promposing, Mr. Occhiogrosso recommends that if you are going to ask someone, do it privately, in a caring way.

In agreement with Mr. Occhiogrosso’s viewpoints are Mr. Scullin’s viewpoints. Mr. Scullin shared a personal anecdote with me that cannot be explicitly shared; however, it can be summarized.

In his glory days of high school, a young Scullin asked the girl of his dreams to go to prom with him and to date him. At first she gladly accepted, they attended prom, and enjoyed each other’s company until two weeks later. In those two weeks the young Scullin fell in “love,” only to later get his heart broken… and some other things broken.

Even though things did not work out in his situation, Mr. Scullin still believes he acted appropriately by asking the girl he liked out rather than putting on a show for others to ask her out. According to Mr. Scullin, promposals are an act of cowardice and are just done to draw attention to the situation.

Boys or girls that do them, do them to add an extra layer of pressure in order to assure a “yes” from the person they are asking. In order to mask their own insecurities, promposals are performed, similar to reality TV shows, to publicly humiliate the person they ask if they do not say “yes.”

That is why, according to Mr. Scullin, promposals are faulty and just acts of pretentious display rather than true affection. If you want to ask someone out or go to prom with them, build up the courage to do so and tell it to their face.

Personally, I agree with the notion of ideas discussed by Mr. Occhiogrosso and Mr. Scullin, as they present the fallacies of promposals. Promposals, if they are to be done in public, are a rash attempt to draw attention to the situation to mask personal insecurities and cowardice.

If you want to ask someone to prom, then just do it without thinking twice. Promposing isn’t necessarily a bad thing, and it has become a tradition at Harriton; however, this doesn’t mean that you should do it publicly. My personal recommendation is that you ask the girl or guy you want to take to prom in private, whether it be over text or in person, to see if they would want to go with you.

If they agree and specifically ask for you to prompose (i.e if they are your significant other), then do it privately. Another personal recommendation is that for anyone who is being forced into a public promposal, call the person out on their insecurities and make them ask you by themselves.