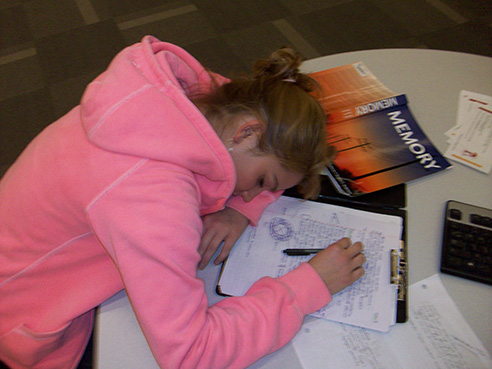 On Thursday, the LMSD School Board met with parents, teachers, administrators, coaches, students, sleep scientists and other community members in Lower Merion High School to discuss a monumental change in the district: school start times.

The meeting was timely, coming on the heels of four landmark events:

1) A new California law that passed just 10 days earlier, the first statewide legislation to prohibit high schools from starting before 8:30 am, and middle schools before 8:00 am.

2) A powerful report was issued by a joint commission of the Commonwealth of Pennsylvania on October 17, asking school districts to consider delaying school start times, stating that “A number of ways to address insufficient sleep in adolescents exist, but the response that garners the most attention, has the greatest potential to impact large numbers of students at the same time, and has been endorsed by numerous professional organizations, is delaying secondary school start times.”

Dr. Kristina Paul, special assistant for student achievement, methodically shared information regarding the biology of teen sleep, recommendations by professional organizations, and the discussions of the Advisory Committee assembled by the district. She shared the new proposal: elementary schools start at 7:45 a.m., middle schools at 9:05 a.m., and high schools at 8:25 a.m. Dr. Kathy Blackburn of TregoEd shared the Advisory Committee’s decision making process.

She then answered the questions posed by skeptics and supporters. The Board made its comments, and the session ended with comments from attendees, most of whom seemed in favor of the new schedules, and some, largely elementary school parents, who opposed the earlier start times for the younger children (See Does Lower Merion Want More Sleep? A Look Into the Board Meeting).

The Science Behind the Storm

The data summarized by Dr. Paul included 2014 recommendations by the American Academy of Pediatrics (AAP) that no middle- or high-school should start before 8:30 am, citing insufficient sleep in adolescents as a public health crisis. National polls found that 87% of adolescents get less than the recommended minimum of 8 hours of nightly sleep.

Dr. Paul, reported that a 7:30 a.m. bell time means that teens must be in bed by 9:30 p.m. to get their required sleep. But the timing of the release of melatonin (the hormone associated with sleep rhythm) in teenagers forces them to remain alert until 11:00 p.m. or later, and their melatonin levels do not decline until later in the morning (see Harriton Needs Sleep and Here’s Why).

Aligning an individual’s sleep opportunity with their circadian rhythm, allows for better quality and quantity of sleep as well, studies have shown.

What do LMSD Students Want?

Dr. Paul reported the findings of the Challenge Success Survey, taken by students districtwide, which was overwhelmingly in favor of later school start times. The survey revealed that 68% of students reported getting less than the minimum recommended hours of sleep, and high school students get an average of only 6.5 hours of sleep. 59% believed that a delay in start times would be effective in addressing student stress, health, and well-being.

Student council president Graham Branscom said that a student government conducted study reported 67% of students wish to push back start times by 30 minutes to an hour, and student athletes, who would be among those most impacted by this change, generally agree with delaying start times.

The LMSD School Board’s Advisory Committee: Who they were and what they did

While these survey data are recent, this issue itself is not new to the district. In fact, parents first raised concerns with the district in 1999. In 2014, Lower Merion formed a committee to study the issue, and in 2016, the Regional Adolescent Sleep Needs Coalition was formed.

That same year, Dr. Judith Owens, nationally-recognized sleep expert, visited the Radnor area and participated in a panel discussion called “Sleep and the Adolescent Brain.” In 2019, she returned to present “The Science of Sleep.”

Amid growing community support and advocacy for delaying school start times, the LMSD School Board created a Research and Development Advisory Committee in spring 2019, to investigate the topic and draft a recommendation to the Board as to when schools should start.

The Committee was composed of parents, teachers, small business owners, administrators, extracurricular activity organizers, and students. However, Dr. Paul felt that it was more difficult to hear the perspective of working families due to meeting schedules bound by the need for continuous conversation for conflict resolution.

Implementing this now would cost the district about $4 million (the price of buying 11 new buses), but if implemented after the new middle school is built, would save the district the cost of one bus. A study published by the RAND Corporation has found that a great deal of money would be saved overall by changing start times to 8:30 or later because of reduced accidents and higher graduation rates.

Many community members applauded the Board for taking action on this issue and even expressed concerns that the District should have already done it by now. Bucks County, Unionville-Chaddsford, Phoenixville, Tredyffrin-Easttown, and now Radnor have already made the change.

Some community members expressed strongly held beliefs that delaying the bell only means teens will just stay up even later and remain just as sleep-deprived. They believed that the core reasons for this sleep insufficiency are unrelated to start times, but instead are due to excessive homework, poor habits, too much screen time, and overcommitment to extracurriculars.

Elementary school parents worried that younger kids might wait for the bus in the dark. The Advisory Committee reviewed this, and Dr. Paul explained that it is a minor concern, as early morning darkness is limited to a two to three week period in autumn, when the sun is just rising at 7:00 am (the earliest bus pick-ups will be at 7:03 am). For the rest of the year, the light is bright enough to be classified as “after-civil-dawn hours.”

Other parents voiced concerns about after-school childcare for younger kids that was previously met by older siblings; insufficient sleep among elementary school children with a 7:45 a.m. start time (the science is still unclear on this, whereas the harm to older children is clear); and inadequate family time.

Board Member Diane DiBonaventuro asked Dr. Paul if, with the two-tier model, there were attempts to modify the schedule and find efficiency to reduce the number of buses needed or the overall cost of the model, and how “into the weeds” the transportation department went when finding a solution. Dr. Paul responded that she did not feel equipped to fully answer this question.

Since the meeting, community members have taken sides on the issue. Some community members feel that their concerns have not been given enough priority. Others accuse proponents of using their school-age children as “guinea pigs” and “to get rich by doing research.”

Some have accused the District of “setting it up to fail,” arguing that they did not present all possible alternatives or presented the change as a  zero-sum game in which only one set of children can benefit, while the others lose. To address concerns, the district has scheduled a series of meetings with the community during the next two months, before voting on the final proposal in March 2020.