An Interview With Mikey Kotler and Andy Wu 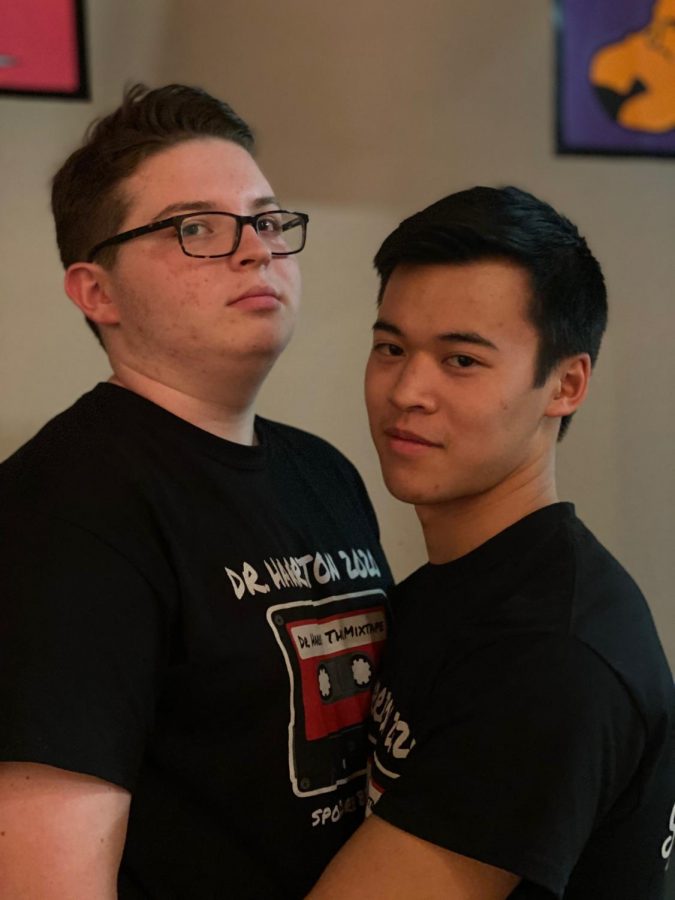 The biggest event in the lives of Harriton students is tonight: Dr. Harriton. As a part of the Banner’s coverage of the event, I had the chance to sit down with two of Harriton’s finest to talk to them about what their experience with the show has been like.

Mikey Kotler and Andy Wu are two juniors that auditioned and were accepted into the esteemed ranks of 2020’s Dr. Harriton. The team has been practicing for months now, and at the time of this interview, the competition was less than three weeks away.

The Harriton Banner: To the people out there, you’re celebrity figures. But we’re trying to get to know the real you, so can you tell us a little bit about yourselves?

Mikey Kotler: I’m a friendly facist, a tyrant that you can trust, and Dr. Harriton is a great group of guys and I recommend everyone tries out.

Andy Wu: I hail all the way from Belmont Hills, one of the few. I’ve been doing music for a while, and that’s what I’m into.

THB: What charities are you guys supporting this year?

MK: And a multitude of other nonprofit organizations in our area, but mainly those two.

THB: Dr. Harriton’s coming up in a couple weeks, I’m sure you guys are deep in preparation. Do you have any favorite memories so far that you want to recount?

AW: We performed at Gladwyne Elementary School for all the kids there.

MK: Gladwyne was a fun day. Anytime we got to perform in front of kids, they’d go insane anytime we’d do a cool dance move or something like that. It was pretty cool.

NB: Do you have a favorite part of the Dr. Harriton experience?

AW: There’s really nothing else like this, anywhere you could go. No clubs, no sports, none of them are really at all similar to this. It’s really a one-of-a-kind experience. You have ten guys, and I don’t think there’s any sport where you’ll be holding each others’ hands and dancing. You just get really close with everyone, and it’s really something that’s amazing.

THB: Do you guys have bets on who’s going to win or favorite acts that aren’t your own?

MK: We’re not getting there yet, it’s anyone’s game at this point, and I really don’t care who wins. Everyone’s worked so hard, and it’s the night of the show that really matters.

AW: It really depends on what the judges like. For favorite acts, Rowan’s is pretty cool, but we actually haven’t seen a lot of them yet because a lot of ours aren’t finalized.

THB: Any classes, teachers, clubs, activities, other students you want to shout out?

MK: I want to shout out the Harriton Boys’ and Girls’ Swim Team because I came late to every practice because of Dr. Harriton, and they were still a flexible team for me being extremely out of shape, and it’s fun. Everyone [should] do swimming and diving!

AW: I’ll give a shout out to Harriton Chamber Ensemble because I literally have not gone to a single meeting the entire year because of Dr. Harriton!

THB: You two are the only junior members, what’s that like? Do you feel like you’re at a disadvantage or a hidden advantage?

MK: I’d say hidden advantage, too, because I get home from Dr. Harriton and then I go to swim practice for two hours, then I come home, and I’m exhausted. [This] really taught me how to prioritize what work needs to be done, and what can wait. It made me super efficient when I got home, because I ate dinner and went to bed. I think it’s going to help me further down the line. It’s hell right now, it’s terrible, but it really has changed my entire work ethic.

AW: I’m taking a slightly different approach: I think it’s an advantage because when people are watching the show they’re going to be like, “Oh wow look at all these upperclassmen, oh wait there’s only two juniors, we gotta look at these juniors, there’s only two of them.”

AW: I think it would probably be more fun as a senior since you know all of the people.

MK: Still, Andy and I aren’t missing out on the shenanigans or anything like that.

AW: You’re going to be tight with everyone no matter what.

MK: Some of these senior guys come home and get out of school with three free [periods].

AW: They have a lot more free time, while it’s very hectic for us, but we manage.

THB: Any final thoughts, things you want to add?

AW: Be there or be square.

MK: Honestly, just come. If you don’t come, you have terrible school spirit and you think it’s cool to not donate to charity.

AW: What else are you doing with your Friday nights?

You can get tickets for Dr. Harriton here.