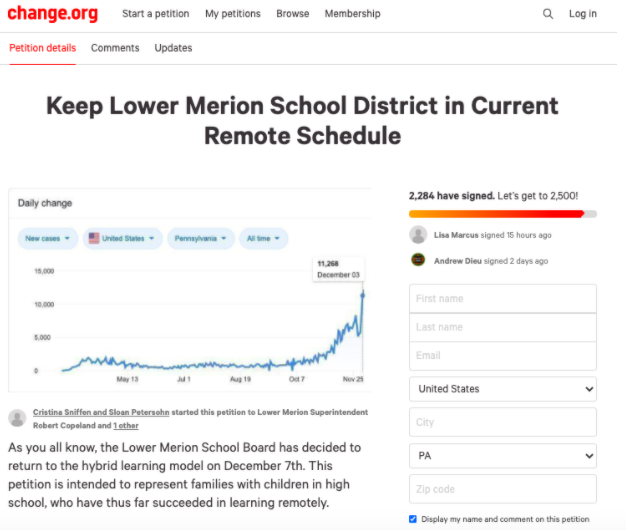 This decision was met with a lot of resistance from the community, leading to petitions and numerous complaints filed to the administration. The main concern is safety: community members are worried that having kids attend school will accelerate the spread of the deadly virus, despite the safety precautions taken by the schools.

On the first day of hybrid after Thanksgiving break, there were over 700 new covid cases in Montgomery County alone. This fear of further spread is a credible one as there is a significant chance people are attending school with the disease.

This concern was voiced the loudest by a petition created by Harriton seniors Cristina Sniffen and Sloan Peterson. This petition has over 2,200 signatures currently and was shared on all social media platforms by countless concerned parents and students.

To further explain their intentions in the petition description, Sniffen and Peterson said: “Every LMSD student that attends school on Monday places not only their family, but every teacher, faculty and transportation member at unnecessary risk for COVID-19.”

In an interview with the two Harriton seniors, they expressed their motivations for starting the petition by saying it began with their reaction to Superintendent Copeland’s email entailing the plan to go back hybrid.

“We were shocked,” the two said, “the cases in Montgomery County are at an all-time high, and the local hospitals are at near-capacity.” Sniffen added, “We have already had multiple staff members and students contract the virus, and Sloan and I do not feel that the risk of returning to school is justified.”

When asked about their views on the success of the petition, they said “the signatures and the involvement of the community showed how we gave Lower School District a voice.”

Their reasoning for why they were met with resistance from the administration was that “they [the school administration] were feeling pressure from other fronts, such as parents with young children and those who need their kids at school.”

Overall, the petition and their efforts were proven successful as the state shut down high schools from operating in person. It is unclear whether or not the petition had a direct impact on this decision, but it had a heavy impact on the Lower Merion community regardless.