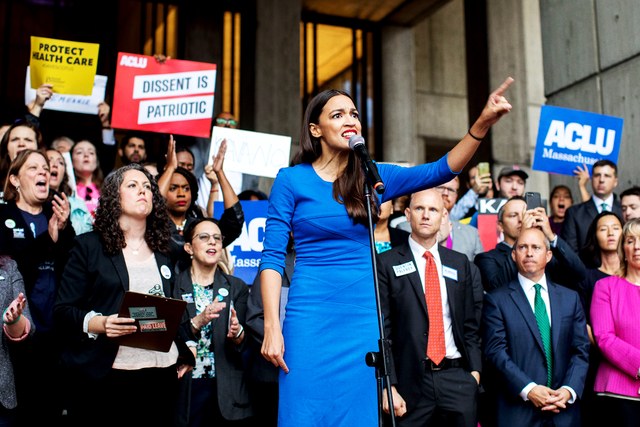 Rep. Alexandria Ocasio-Cortez of the Bronx (affectionately known as AOC by her fans) has captivated the nation ever since she defeated incumbent congressman Joe Crowley in June’s Democratic primary election. Crowley’s status as Democratic Caucus Chair and one of the highest-ranking House Democrats made Ocasio-Cortez’s victory one of the biggest surprises of the 2018 election cycle and a symbol of the Blue Wave.

As her Jan. 3rd inauguration drew nearer, AOC began to capture the attention of Fox News and other conservative media outlets. Over the past several months, they have savaged her for her clothing, financial struggles she has discussed on social media, and more.

But she fights them off every time. On Thursday, a right-wing troll attempted to discredit her by Tweeting a video of her dancing during her days at Boston University. Her response? A video of her dancing outside her new congressional office with the caption “I hear the GOP thinks women dancing are scandalous. Wait till they find out Congresswomen dance too!”

This is just the latest example of AOC’s PR mastery. She has a fiery charisma that makes her practically immune to conservative attacks — and terrifying to the GOP. They’re right to be scared.

The question is this: why does the right waste time on such petty attacks? What about this one congresswoman so fascinates them? The answer lies in the GOP’s exhaustive focus on voting. They understand how voters think, and over the past half-century they have made a science out of molding the electorate to suit their interests. Beginning with Nixon and Reagan, they won over the white working class, creating a wide base for a party whose policies benefit only a small, wealthy portion of the population.

The fact that the GOP successfully persuaded such a massive demographic to vote Republican against its own economic interests is perhaps the greatest feat in modern American politics, and an embarrassment for the Democratic Party.

How did they pull it off? Their strategy relied heavily on the skillful communication of the party’s leaders. In particular, Reagan’s calm but commanding oratory seized the adoration of a huge number of Americans despite scandals like Iran-Contra and the failure of Reaganomics.

In short, the Republicans know the importance of populism because it enabled their rise in the latter decades of the 20th century and is essential to their continued success in American politics. They also know to go on the offensive when populism emerges among their opposition.

The GOP is afraid of Alexandria Ocasio-Cortez because she is a populist. She is currently the most fiery and charismatic member in the Democratic Party, and one of its most skillful communicators. Aside from her passionate oratory, AOC often broadcasts live on Instagram several times per day, making Washington politics accessible in a way no one has before by sharing the minutiae of her blossoming political career on social media. Eventually, if it doesn’t happen in 2020 or 2024, she could become the first female president.

If they’re smart, the Democratic leadership will recognize that promise and use AOC as a figurehead of the party. She is by no means perfect — she’s made incorrect claims regarding Medicare-for-All funding on both Twitter and The Lead with Jake Tapper — but her populist charisma is an invaluable asset.

Imagine if, instead, liberals had a spokeswoman who is proving herself increasingly untouchable to those kinds of attacks. Ocasio-Cortez grows only more exciting by the day. The Dems embracing both her and her populist tactics could mean great things for the party — and eventual destruction for the GOP.