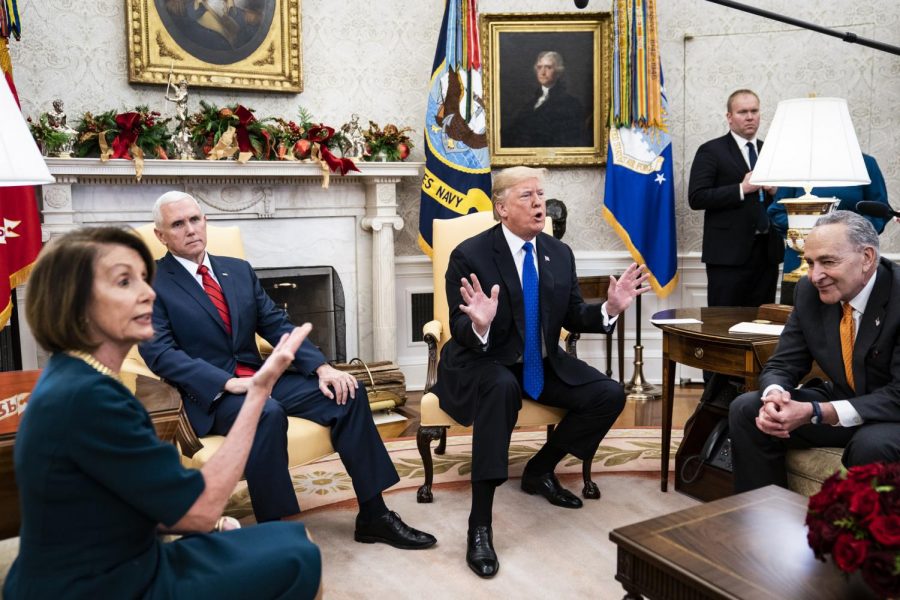 On Friday afternoon, President Trump agreed to sign a bill to end the partial federal government shutdown. The House and Senate quickly passed a stopgap bill to reopen the government, and the President signed it in the evening. The funding package included none of the $5.7 billion Trump says he needs to build a wall on the southern border. At 35 days, the shutdown was the longest in U.S. history, beating former Speaker Newt Gingrich’s previous record of 21 days in 1995.

The shutdown stemmed from a fundamental disagreement over border security between congressional Democrats and the Trump administration. Until Jan. 25, the President refused to sign into law any bill funding the government that did not also include the $5.7 billion for his border wall. Or maybe it’s a “steel barrier” now. The details are shaky.

Throughout the 35 days of the shutdown, Democrats remained equally closed to negotiation, insisting that Trump’s immigration concerns are nothing but fear-mongering and that the wall would be a massive waste of taxpayer money.

Congressional Republicans were somewhat powerless in the dispute. Democrats now control the House of Representatives by a 37-seat margin, meaning no wall funding will ever be approved in the lower chamber of Congress. In the Senate, Republicans need 60 votes to pass an appropriations bill. They only have 53.

Most commentary has depicted Trump’s performance in the shutdown battle as politically inept. They poke fun at the ironic disparity between the supposed dealmaking prowess he’s bragged about and his inability to negotiate a suitable border-security agreement with his opposition. They frequently cite the fact that, according to the latest Politico poll, 54 percent of Americans blame him for the shutdown and 57 percent disapprove of his performance as POTUS.

I want to point out that these numbers aren’t all that different. Knowing how inaccurate polls have been in the past, the true percentage of Americans who disapprove of Trump and blame him for the shutdown could be nearly identical. This indicates that Trump’s former refusal to compromise on the border wall didn’t necessarily lose him any support among Republican voters, a rising number of whom support the wall. If he has shed supporters, no numbers suggest the loss is anything more than marginal.

However, the shutdown certainly didn’t gaining Trump any political points. At first, I thought it would. From the moment his talks with Democratic leadership in the Oval Office broke down into a shouting match on live television, I believed Trump would use the shutdown to send a message to his base that he would not bend to political pressure on immigration. If he’d played it right, Trump could have cast himself as an unshakable warrior for border security and cemented support for a border wall.

But he didn’t play it right. In the 33 days so far of the shutdown, Trump has spent little time doing what he does best: campaigning. He didn’t give any of his captivating, off-the-cuff speeches at rallies, grab headlines with outrageous allegations, insult or belittle Pelosi on Twitter as liberally as he has other opponents, or using any of the other populist tactics he uses to excite his base. His Jan. 8 primetime address — his only publicized speech during the shutdown — had none of the raw, unscripted vigor that many supporters love.

In the past, I’ve criticized Pelosi and other established Democratic figures for their disjointed and ineffective messaging. I stand by this position; Pelosi and Schumer’s awkward and dull response to Trump’s address on Jan. 8 proved they cannot communicate persuasively with the American public.

But Pelosi’s weak public presence by no means makes her a bad politician. Her introduction of H.R. 1 — an electoral reform package that would target voter suppression, resist foreign influence in elections, and expand voting rights — as the first bill in her new Democratic House proves she is a markedly progressive lawmaker. More notably, her retaking of the Speaker’s gavel after eight years in the minority demonstrates her remarkable ability to brave the chaos of Washington. There’s also the fact that she is the highest ranking woman ever in U.S. government.

Pelosi’s deft performance in the shutdown battle showed that she is highly skilled at the game of politics — and highlights Trump’s inability to play that game.

At first, both Trump and the Democrats dug in their heels, expecting the other to give in first. Pelosi never did — but Trump cracked. Over time, polls indicated that the number of people who blame him for the shutdown was rising — slowly, but steadily. This motivated him to offer, on Jan. 19, to extend DACA protections. He was met with a hard “no.” Pelosi has made it clear that her House will approve exactly zero funding for a border wall. Because polls suggest only 35 percent blame her for the shutdown, she has no political motivation to compromise. To further demonstrate her power over the White House, Pelosi delivered an equally unconditional refusal when Trump attempted to deliver the State of the Union address without an official invitation from both houses of Congress.

Trump started to worry, and for good reason. Every day the shutdown continued, more Americans blamed him, and the bigger a weapon it became for his Democratic challenger in 2020.

With Democrats in control of the House and Pelosi showing no sign of relenting, it seems that Trump realized he will probably never get his wall in the last two years of his term. His failure to fulfill that iconic, unforgettable campaign promise — even during the two years his party commanded both houses of Congress — could cut a massive hole in his reelection campaign. Pelosi knows this, and it’s why she held firm.

The President lost. When he makes his bid for reelection, the most xenophobic among his base will fault him for failing to build the wall. By Friday, all he could control was how much they faulted him for the shutdown as well. His only option was to give in as quickly as possible. If he’d held firm even longer, his universally unappealing performance in this dispute would have become an even bigger thorn in his side come 2020.