A Moderated Mess At The Presidential Debates 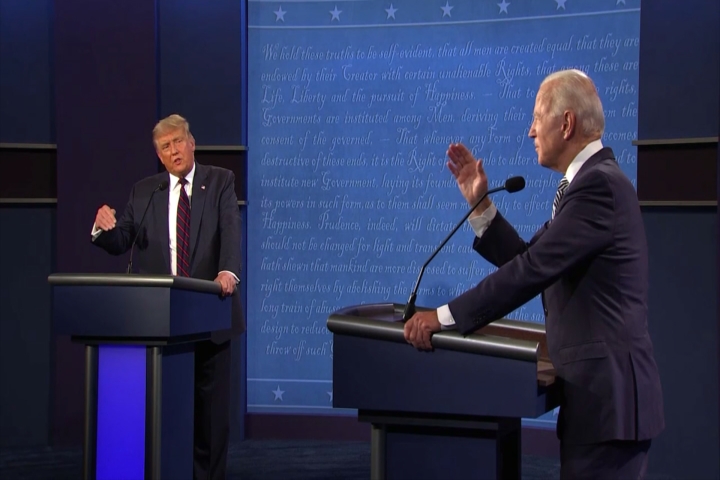 I, along with more than 73 million Americans, tuned in for the first presidential debate. It was a mess. Jake Tapper, a CNN correspondent, called the debate, “a hot mess, inside a dumpster fire, inside a train wreck.”

Dana Bash, another CNN correspondent, said, on live television, that is was a “shitshow,” and Michael Steel, a Republican strategist, said, “I’ve seen better-organized food fights at summer camp.” While many could blame President Trump entirely for the car crash nature of the debate, that isn’t productive.

Calling Trump out for fostering toxic debates isn’t going to change his behavior. After all, his followers eat it up. Thus, the question becomes what can we change, so that the debates don’t become so chaotic. The answer is found in how to moderate these debates with disrespectful candidates.

While Chris Wallace is a highly respected television anchor and journalist, he failed on several occasions during the first debate that led to it rapidly deteriorating.

First, he only brought up that Trump was breaking the rules his campaign had promised to abide by after an hour and nine minutes had already passed.

Second, Wallace was too neutral. When Trump was repeatedly interrupting Biden, Wallace still tried to give equal criticism, but that doesn’t work in this scenario because Biden wasn’t the offender.

Third, Wallace let an egregious amount of interrupting by Trump occur. At one point Trump interrupted Biden more than 10 times in an only 3-minute period. These failures to properly stop Trump’s chaos at the first debate need to be rectified.

The debate’s spectacular failure isn’t entirely Wallace’s fault; many other moderators and journalists have found this president hard to reprimand, but Wallace’s mistakes do show a flaw in how Trump is interviewed. Wallace’s key mistake was thinking that Trump would behave like a normal interviewee.

Moderators must lose this insane notion that Trump—a president who has made assaulting reporters his raison d’être—will respect and honor a debate’s rules, regulations, and norms. Instead, future moderators must be strong against the president’s contempt for courteous debates.

First, moderators should lay down the agreed-upon rules at the beginning of the debate so that viewers know what is and is not normal debate decorum.

Second, moderates can make waste of the concept that they must be equal in their criticism of the candidates. Criticism should be fair, as in: if both candidates are misbehaving the moderator should not only call out one, but criticism must not be equal when the offenses by the candidates simply aren’t equal.

Third, the moderator should protect the sanctity of candidates being able to express their ideas. Wallace let Trump interrupt Biden too many times, barely allowing Biden to properly answer his questions. While there are doubtless other ways to control this unruly candidate, these three led this past debate to spiral.

Like the rest of the country, I learned of President Trump’s COVID-19 diagnosis last Friday. While this potentially means that there will be no more presidential debates, that does not mean that Trump’s moderation in these debates does not need rethinking.

There will be candidates who attack moderators and journalists, who attempt to turn our debates—a fixture of democracy—into a mockery, long after Trump is no longer running for office. Moderators must be prepared for these candidates. They need to be able to hold their own and prevent these debates from descending into a “who has the loudest voice” contest. Otherwise, like what we all saw last Tuesday, these Trumpesque candidates will turn our debates into a “hot mess.”