Recapping the 2020 Election with the HYVC 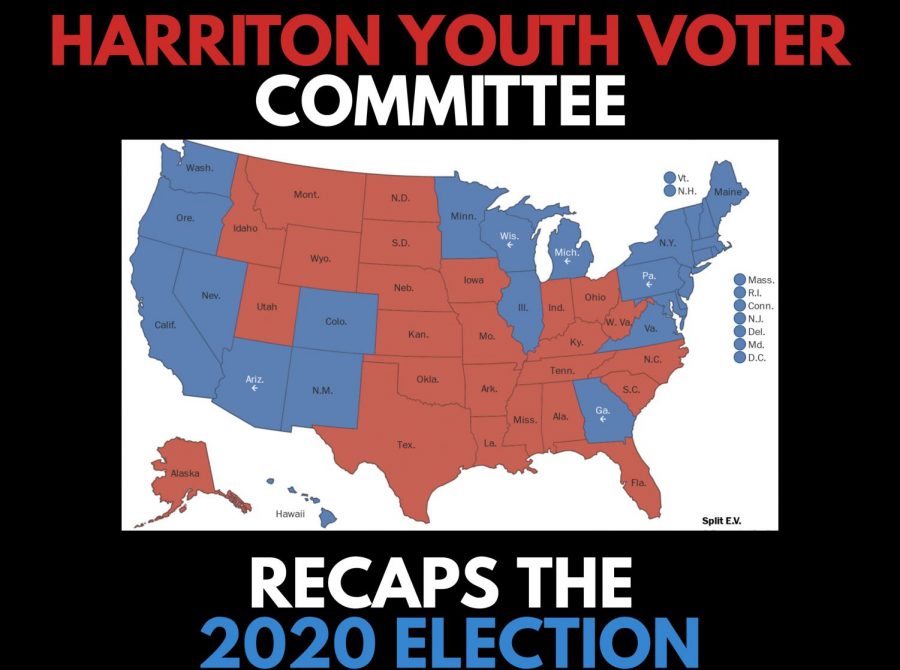 The announcement that Joe Biden had won the electoral college, and therefore had become the president-elect, caused a varied response in the highly polarized and divided United States. Democrats and Biden supporters rallied behind the announcement, even taking to the streets to celebrate; on the other hand, Republicans and Trump supporters made claims of voter fraud and supported the president’s calls for recounts in many states decided by a small margin of voters.

President Trump’s dedication to sticking out the fight for flipping the results through court cases and recounts has caused the official decision of the election to continue. We caught up with the HYVC to get their opinions on the current state of the country and the results of the election.

THE HARRITON BANNER: What are your initial reactions/thoughts on Joe Biden being called the president-elect?

Thomas Batteur: After paying close attention to the election during the past week, it had finally been confirmed that Biden was set to win Pennsylvania, and render it impossible for Trump to win. I had initially thought,”Wow, this is big.”

I somehow expected that the possible scenario of the 2020 election would be that of a Biden win resulting from later counted mail-in votes which will consequently be difficult for Trump to concede. As it turns out, this is the exact scenario as now we currently have Trump challenging the courts for a multitude of reasons.

After watching Biden and Harris’s victory speech in Wilmington, I only hope for Biden’s calls for bipartisan action to be upheld during his presidency.

Sarina Goyal: My initial thoughts were relief and happiness. Although I was unable to vote, I still had hoped that Biden would win the election. I realize this is only the beginning of a long path ahead of us and there is still much to be done, but I did feel like our country needed a change in leadership after the past 4 years.

Kaelyn Klatte: I was doing some homework when I got a notification from the New York Times that Biden won Pennsylvania. I wasn’t sure how to react—I checked the NYT electoral college map, and saw that Biden had passed the 270 threshold, but I refused to put too much faith into a single source, and cross-referenced that map with various other sources.

Each of them told me the same thing, so I ran to my younger sister, called my parents, and called my older sister to share the exuberant news with them. I texted all of my friends later on, who all already knew of the outcome of the election.

Ben Kozloff: I spent the week of the election glued to CNN and other networks. Based on the trajectory of all the votes coming in, it seemed likely that Joe Biden would be projected the winner, and I wasn’t surprised by the call. I hope that Joe Biden can do what he promised to do by working across the aisle on various issues and unite the American people.

Erika Kurre: I was very excited to hear the news that Biden would be the next President-elect. I think this country is in need of some serious change and Biden will lead us in the right direction. Though he might not be everyone’s ideal candidate, I believe he can create positive change and help the U.S. to combat COVID-19, climate change, and more.

THB: What are your thoughts on the Trump administration’s response/call for recounts in several states?

Neha Dhanwada: Personally, I’m not all that surprised by Trump’s administration’s response to his crushing loss; he has and will always be an eclectic person, too often to a fault. Instead of acting gracious of his 4 years, he turned to having a breakdown, and created quite unfounded rhetoric regarding voter fraud, and thus, seemingly lost some respect from his base (though many avid supporters actively vouch for him still).

BK: Donald Trump is within his rights to call for recounts and file lawsuits in swing states. We will have to wait and see if any of these efforts are successful. However, the administration’s refusal to work with the Biden transition team hurts the country. Joe Biden and his team should have access to national security briefings and lines of communication through the state department. Regardless of the outcome of the election, the next president should have access to what he needs for a smooth transition.

THB: What did this election say about the state of democracy in the United States?

TB: While closely watching the results of each state, it is shocking to see how divided America has become. I do believe that our new administration should work closely with opponents to help stop the spread of the pandemic.

ND: I believe this election was really indicative of the precedence of democracy in America. It was, in its truest form, a fight between democracy and, quite frankly, thinly veiled fascism. In the end, through a tumultuous week, it seems that democracy won.

SG: I feel that it’s a good sign that the winner of the election matched the popular vote. That being said, I disagree with the role of the electoral college and I feel that it is unnecessary. Every citizen’s vote should count equally.

EK: This election affirmed how split the current state of democracy is. Though there was a clear winner, it was a closer election than many believed it would be. Some believed that Biden would win by many more votes, while others believed Trump would win all the swing states. In my opinion, our country has some work and healing to do.

THB: Why or why not is this election important to you or the people around you?

LB: This election means hopefully a fresh start, with new ideas, which will hopefully bring some solutions to the United States’ issues that are occurring at the moment. I think that for me and the people around me, this means change, and most importantly, acceptance without judgement or division. I am hopeful that the United States under Biden will mend some of the racial and gender-related issues that have not been resolved in any way.

ND: It has been especially important for the BIPOC and LGBTQ+ that I surround myself with, along with those that I simply don’t. This election truly advocated for their rights, along with all those disadvantaged. Not because Biden himself will implement anything influential, but as a stepping stone for those who come after him who will make real change.

KK: I know plenty of BIPOC, LGBTQIA+, and other groups who could have been deeply and negatively affected by the results of the election. The unity of our country, as well as the human rights of many, the environment, and the health of Americans in relation to COVID-19 heavily depended upon the election. (I cannot express the amount of aggravation I experienced while watching this election go by, being just shy of voting age…. I really wanted to vote but unfortunately could not.)

THB: What were the implications of this election?

Evie Greenberg: The implications of this election were immeasurable. The future of our courts, the narrative of our country, our international standing, and the lives of every American all rode on this election. While elections are always significant and historical, this election in particular will go down in history.

The United States is coming off of a year marked with tribulations, notably the president’s impeachment, the largest movement in modern history (Black Lives Matter), and of course an unprecedented global pandemic, and this election will determine the course of our country.

Olivia Kim: I think this election may set a new precedent (whether it be a good one or not) for how future changes in power will go. The actions that have been taken to influence voting and the actions that have occurred after the counting of votes have a frightening implication for our democracy. If our presidents can not partake in a cordial passing of power, we may find ourselves entering a fascist dystopia.

KK: This is bound to be one of the most important elections in our lifetime. Every modern issue (COVID-19, international diplomacy and organizations, the SCOTUS, racial tension, LGBTQIA+ rights, climate change policies, women’s rights, firearms and weapons regulations, healthcare, crime, the economy, etc.) will be greatly affected. Trump and Biden have extremely polarized views and different ideas on what is best for the future of the United States of America.