Social Media Developers Lack The One Thing They Need: Creativity 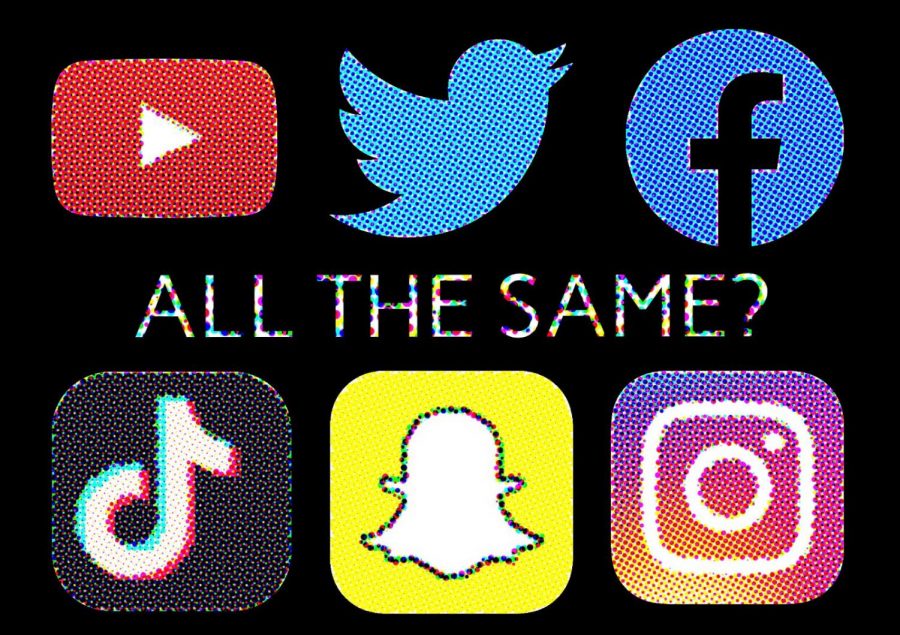 Talk to any Millennial or Gen-Zer and you can bet on them having at least half of these six apps on their phone: Instagram, Twitter, Snapchat, YouTube, TikTok, and Facebook. They are practically staples of everyday life.

You would think that six different apps would each bring something different to the table, right? After all, there isn’t much of a point in having six apps that all do the same thing. However, despite all advertising different purposes, these social media apps are, in more ways than not, exactly the same.

They all do the same thing, too: post pictures that disappear after a set amount of time (usually 24 hours). Stories are not the only function that these apps share, however. Everything from direct messaging and a ‘Home’ feed to the very placement of each button on the user interface looks like it was copied and pasted from each major social media platform to the next.

It is honestly disappointing, and as someone who has accounts on all of these social media platforms, I wish I saw something different each time I logged on.

Even YouTube (which is arguably the most unique among these because it is more of a streaming platform for user-uploaded content than social media) causes me to sigh every once in a while when I see another attempt at becoming more like TikTok or Instagram.

Hashtags are another copycat feature on this list, and while it makes sense that users would want ways to reach more people, one should note how they contribute to the bigger picture.

Facebook is a social media platform that allows users to post text and images, follow and connect with friends and family, keep up with current events and trends, form groups, message them, and includes features such as hashtags, “explore,” and stories.

Twitter is a social media platform that allows users to post, text, and images, connect with and follow friends and family, keep up with current events and trends, form groups, message them, and includes features such as hashtags, ‘explore’, and stories (called fleets).

The fact that I described both apps in the same way speaks for itself. While the online “culture” on each app differs significantly, that difference comes from the users themselves, not the design—which is the focus here.

Just recently, Instagram added a new feature called “vanish mode”, which essentially completes the app’s transformation into a Snapchat-Facebook hybrid. Vanish mode is a direct messaging mode that users can toggle on and off that makes messages disappear as soon as one closes the chat. In addition to this, users are informed if anyone in the chat takes a screenshot of the messages.

If this sounds familiar, that is because it is an exact copy of Snapchat’s flagship feature. If I want to have vanishing messages, I already have Snapchat for that. While some people may like seeing their favorite features repeated on their favorite apps, this change is unnecessary and is an obvious attempt to make users spend more time on Instagram than on its competitors.

It is important to realize that these apps did not all launch with the same themes and characteristics. The copying came later, after the internet became a battleground on which big companies fought to get more users and clicks.

If these app developers see another app become more successful than them for a certain feature, what do they choose? The easier method of copying that exact feature? Or the longer, possibly more expensive method of coming up with something new?

They often say competition and capitalism inspire creativity, but it is clear that this is not the case. The quickest, easiest, and cheapest path to getting more money will always be more of the same.

Why is that? Because when you look at the population of each app, it’s almost entirely the same base of users.

Again, talk to any young person about what is on their phone, and there is a good chance it will be the same group of social media. It is for that reason that companies try so hard to copy each other. If a good chunk of these platforms’ user bases talk about the same subjects, laugh at the same jokes, and follow all the same celebrities, there is not much the developers can do about that. Because of all this overlap, developers must adapt to keep their brand afloat in the endless sea that is the internet.

There is no quick solution to the whole “this looks good, time to copy it” ideology that plagues so many social media corporations these days. It is too late to go back and start removing features that people have integrated into their daily lives, and I doubt any of them are daring enough to take risks with new ideas.

Nevertheless, the lack of uniqueness among social media is disappointing. My hope is that the next generation of apps made by people who are inspired by Instagram, Twitter, Snapchat, and others today will learn to prioritize innovation and creativity over rapidity and greed.