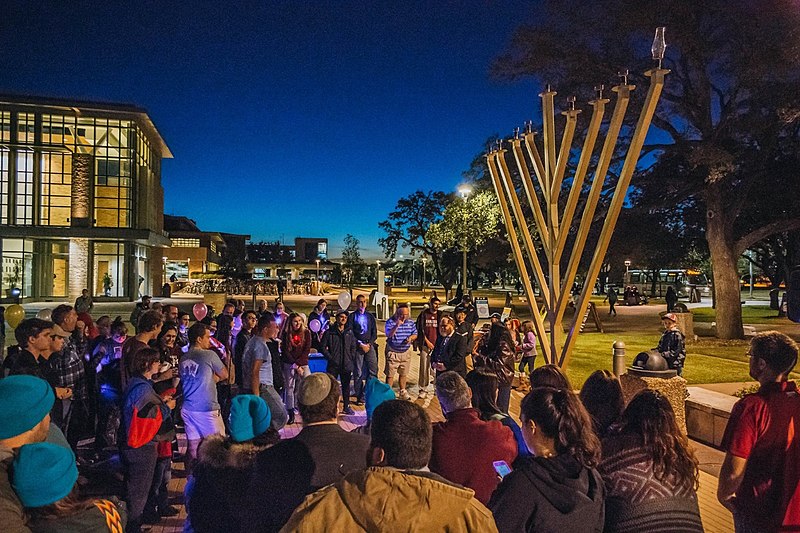 Throughout the eight nights of Hanukkah, Jewish families across the world gathered around menorahs, their faces lit aglow by the luster of the candles. Their homes swelled with the lively beat of their traditional songs, and the air was filled with the aromas of fried delights.

The eight nights of Hanukkah were supposed to be a time of peace and celebration for the Jewish people, an acknowledgment of their survival, and a time for them to come together, free of worries. This intended period of tranquility and commemoration was tarnished by the vile hate crimes committed by antisemites on every night of Hanukkah.

As the number of antisemitic attacks climbs each year, we must reflect on the events occurring around us, not just for our sake, but for the sake of the world altogether.

On the first night of Hanukkah, a holiday display was set up outside of Alameda City Hall in Alameda, California. This display consisted of symbols from all religions observing holidays during December, such as a Christmas tree and a menorah adorned with Jewish symbols. Within hours of its placement, the menorah was destroyed, symbols taken, and the Christmas tree left untouched, a perfect metaphor of life for Jews in a Christian-normative society.

On the second night of Hanukkah, a synagogue in Davenport, Iowa was vandalized. Scrawled in red spray paint near the doors of the temple was the Bible passage “John 8:44”, a passage that is often contorted by white supremacists in an attempt to claim that Jewish people are devil worshippers and liars. One of Temple Emanuel’s rabbis, Linda Bertenthal says that the attack is, “Oddly appropriate to the holiday but in a painful way.” I couldn’t think of a better way to put it.

On the third night of Hanukkah, a Jewish Chabad center in Lexington, Kentucky prepared to light their menorahs. This practice was interrupted by a man who pulled up in a dark vehicle, spewing anti-semitic slurs. When a community member tried to intervene, the driver grabbed his arm, and then sped away, dragging him for a block and then strategically releasing him to run over his leg. While there have been four reported anti-semitic attacks on Chabad centers this year alone, the timing of the event on this blessed occasion gives it that much more gravity.

On the fourth night of Hanukkah, the Jewish community of New Hampshire was devastated by the anti-semitic tweets by their own state representative, Dawn Johnson. Her tweet shared a link from the self-proclaimed Neo-Nazi website “The Daily Stormer,” with an anti-semitic caricature that exaggerated and degraded ethnic Jewish features and played on stereotypes that Jewish people are greedy. Johnson is yet to receive any consequences for her hurtful actions.

On the fifth night of Hanukkah, a man in Miami, Florida hurled anti-semitic slurs at a Jewish father and son, threatening to kill them, and referencing the Holocaust by telling them that “their time has come.” When the man’s backpack was searched, he was found to be in possession of several hunting knives, and police say that his usage of anti-semitic slurs continued long after he was taken into custody.

On the sixth night of Hanukkah, the website of a Jewish high school in Long Island, New York was hacked by white supremacists and emblazoned with nazi imagery and slurs. The website was hacked to say “North Shore Hebrew Death Camp,” instead of North Shore Hebrew High School. It also advertised repugnant activities, such as a field trip to Auschwitz, and depicted swastikas. The hackers went a step further to leak the personal information of all the students, staff, and families attending the school to anti-semitic forums on the dark web, putting their lives at risk.

On the seventh night of Hanukkah, anti-semitic and racist messages were written in chalk outside of Amherst-Pelham Regional High School in Amherst, Massachusetts. This graffiti occurred after the school encouraged the spread of positive messages through chalk art, starting after Thanksgiving. The appearance of swastikas outside of the school during Hanukkah, when there had been nothing but positive messages for weeks is indicative of a person who understands the magnitude of the pain they are causing by executing this repulsive act on a holy day.

On the eighth night of Hanukkah, a police officer from Massachusetts resigned after being caught carving a swastika into a fellow officer’s car; however, this incident occurred over a year ago. An investigation was started in mid-November, and the officer who committed this atrocious act was put on paid leave. His decision to resign from the police force after doing such a disgusting and hateful thing was the last blow to the Jewish community since it showed that he still had control over the situation after everything he had done.

While antisemitic attacks are nothing new, it saddens us especially as they take place on days meant to be sacred for the Jewish community. As the next generation, it is our responsibility to make the change and end these vulgar acts of hate. Raising awareness about antisemitism is instrumental in stopping it at its source. Change will not result from ignoring this hate, but instead from acknowledging it, and pledging to be better.