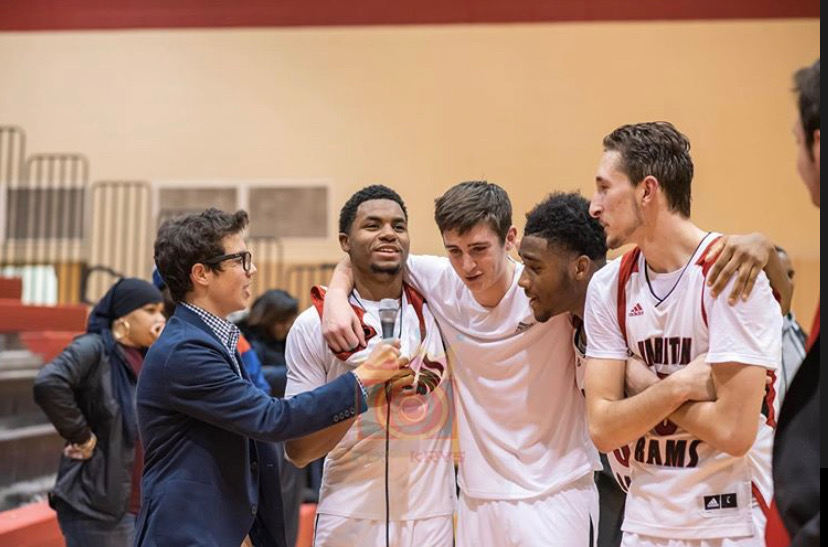 The Harriton Boys Varsity Basketball Team unexpectedly exceeded many fans’ expectations as they moved forcefully through the 2019-2020 season, earning them a spot in the first round of the District Playoffs.

As their final win-loss record of 10-14 may seem disappointing to the players, coaches and fans, something special really stood out this year compared to years prior.

“We achieved stuff we didn’t achieve last year,” starting center Mike Tabasso stated, “one of the major ones was beating LM.”

“It was a lot of ups and downs. Every Game we had the capability of playing our hardest,” Tabasso stated. “The outcome, we really played hard every single game.”

Going into the Lower Merion vs. Harriton game, Harriton was the decided underdog. The LM Aces were easily projected to steam-roll the Harriton Rams and pick up yet another victory for the eighteenth consecutive year. Jack Odiorne, or more commonly known as “Odi,” the man behind the Ram mascot, and the team spirit of the “The Herd,” spoke about the game and the students’ reactions.

“Going into that game, I knew we [would] win because I just had that confidence this year. I honestly got nervous when [Markus Bradley-Lowry] did that spin move and lost the ball,” Odi said. “Harriton had played the better game and deserved to win. [When Bradley-Lowry] lost that ball and picked it back up and made it in[… ]We all just rushed [the court].”

While Harriton came out on top over Lower Merion for the first time in eighteen years, the Rams finished the regular season 3-8 at home, and 5-4 on the road. On neutral grounds (the two teams competing are not playing on either home grounds), the Varsity boys were 2-2.

“I set a goal to go undefeated at home; that was quite a stretch,” Odi stated. “Getting the crowd hype and energetic was my secondary goal. I think my hope is that it only gets better from here.”

The Rams were able to secure a playoff spot come postseason time but fell short of advancing past the first round of the District Playoffs after a tough loss against West Chester Rustin High School.

“There are more goals to reach. This year’s goal was beating LM,” Odi said. “Now it’s what can we do further? Can we win districts next? Can we win a state playoff game next? Can we get to the state finals next?”

The Herd carried through this season. With an immense amount of support and energy, expectations were exceeded in a way that truly helped to improve the team, and push the players to improve upon their own skill-sets for the future. As Tabasso stated, “we pursued our own personal championship.” The 2019-2020 season will go down as one to remember for all the staff and students of Harriton High School.