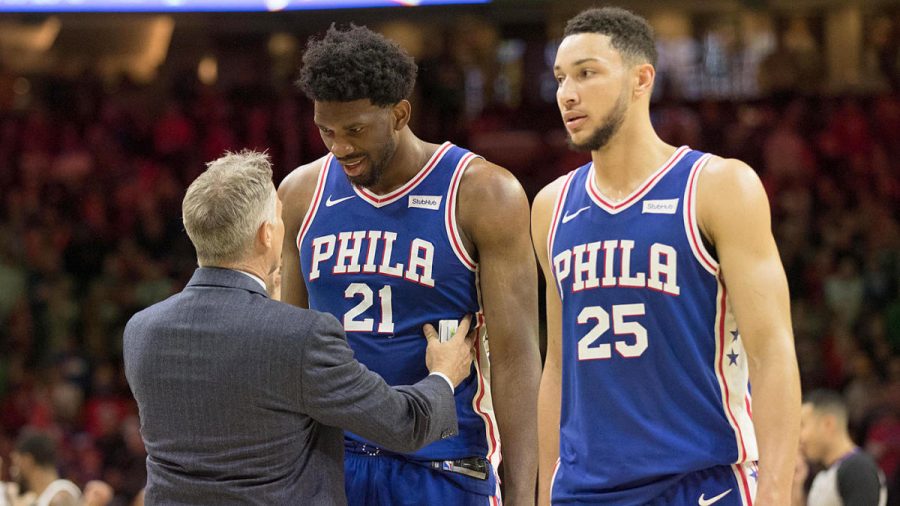 In the first round of the NBA playoffs, the Boston Celtics stunned the Philadelphia 76ers by sweeping them four games to none. The next day, it was announced that, after seven years, Brett Brown had been fired as the Sixers’ head coach.

Brown, who was hired on August 15, 2013, helped turn an expansion level, 10 win team into an NBA Finals contender through the beloved “Trust The Process” slogan.

“The Process,” which still flows through the veins of Sixers fans, has received a drastic change after the announcement of Brown’s firing, leaving it up to General Manager Elton Brand to investigate and initiate an evaluation process of head coaches on the market to best fit the scheme and culture that Brown left in Philly.

In his announcement, Brand mentioned that the front office plans on retaining current NBA All-Stars Joel Embiid and Ben Simmons to continue to serve as the team’s core for the future. Although the chemistry of the two players has been a topic of debate, Brand emphasized that they are looking for a coach that will work on blending their skill sets before any trading options would be explored.

NBA analysts across the league have been rocked with the decision on whether or not the Sixers should trade either Embiid or Simmons, or maintain the current core of the franchise and look elsewhere on the roster for transactions and acquisitions.

Although Embiid and Simmons’ futures with the Sixers have been a toss up, their talent on the floor is undeniable, but in the unlikely event that the team decides to trade the All-Stars, what would the future look like?

“Small ball” has taken its stand in the NBA, but it hasn’t affected Joel Embiid. The 26-year old center has established himself as one of the league’s most dominant big men. If that’s the case, why would the Sixers ever move off of one of the NBA’s best players?

Many NBA analysts across the league have listed injury concerns as the main reason behind moving off of Embiid, along with the ability to spend cap space elsewhere on the roster to create a more  backcourt dominant scheme, which would make it easier to thrive with Ben Simmons.

Additionally, the other big man for the Sixers, Al Horford, never really fit with Embiid from square one. Because of their size, it has proved to be a hard feat to take on guards utilizing the pick and roll.

While Embiid and Horford both produce heavy upside in the paint, they are not primary shooters. Embiid often fades away in the post, while Horford derivatively uses the pick and roll, but instead of driving to the basket, takes a short jumper.

By having Embiid and Horford together on the same frontcourt, it can also limit the effectiveness of Tobias Harris, whose preferred position is power forward where he can stretch the defense. By dealing Embiid, Al Horford would play the five position, while in return for Embiid, the Sixers could land future draft picks, and add another cheap center to add stability to the bench.

Trading Embiid would open up an easier opportunity to build around Ben Simmons, who is more of the type of player that teams value most in today’s game. Letting the game flow through Simmons’ style creates a more similar scheme to teams like the Milwaukee Bucks and their star, Giannis Antetokounmpo.

This trade would also allow the Sixers to find primary shooters who can utilize beyond the arc dominance to give the team some star power.

Ben Simmons has left many Sixers fans in awe with his elite playmaking on defense and crafty dunks dialed up on the fast break, but not all stars are perfect. If you ask any Sixers fan what the main conflict with Ben Simmons is, their answers will be synonymous: the 24-year old All-Star lacks a quality jump shot.

Although Simmons has been training through every offseason to improve on what some call his only weakness, the point guard has only sank 10 of 54 shots from 18-feet out, which is only around 18.5%.

Moving Ben Simmons would mean it would be time to organize the pieces to find a dynamic point guard, preferably one who can effectively shoot from 18 feet out. Developing a quality jump shot is essential for the long run, especially in the playoffs when the lanes get smaller and the margin for error is too narrow.

In 2019, Simmons’ points came from mostly layups, hooks, and dunks, with only 96 attempts at jump shots, and only two percent of his overall attempts from beyond the three point line.

Simmons’ inability to shoot clearly launches red flags. If Brand decided to ship out the All-Star, it would become Embiid’s team, but in return, the Sixers likely would receive a bundle of future draft picks to build a backcourt dominant scheme around the big man.

LET THE NEXT COACH DEAL WITH IT

Chemistry aside, the Sixers have a rare duo of two young superstars. Receiving equal value for such young stars could be scarce. If no deal is done, Elton Brand and the team’s next Head Coach will be tasked with properly surrounding Simmons and Embiid with the pieces necessary to finally make it out of the Eastern Semifinals.

In 2018, the Sixers had prominent shooters in JJ Reddick and Marco Belinelli, and the team was just a basket away from making it to the Eastern Conference Finals. Perhaps the chemistry is there, but the court just needs to be stretched more.

It’s tough to replace the talent the Sixers had assembled. If they add more shooters, and avoid an incredible buzzer beater by Kawhi Leonard, this team may just be destined for a championship.