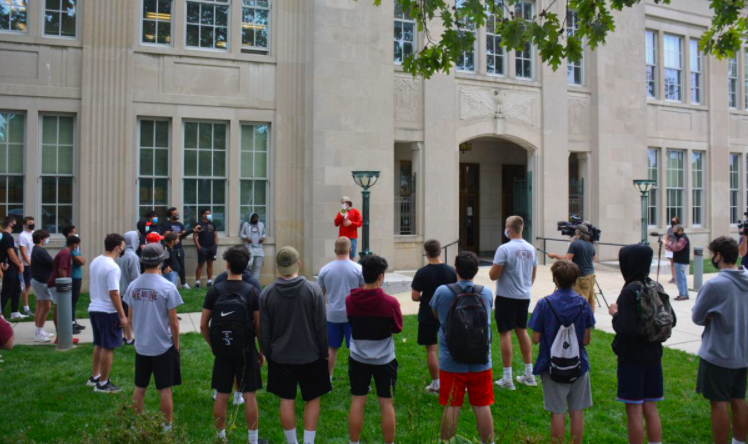 Some Lower Merion and Harriton students expressed that they wanted to continue being a part of their football family.

Others expressed how football is their opportunity to play at the next level and to pursue their athletic and academic interests in college. A video of the speakers can be found here.

This decision was a part of an update to the “Health and Safety Plan for the participation of District teams in PIAA Athletics.” The School Board ruled that sports that pose a low to moderate risk of transmitting COVID-19 would be allowed to play, as long as those teams followed the guidelines written in the safety plan.

Sports with a low-risk factor include golf and tennis, while moderate risk sports include cross country, field hockey, soccer, and volleyball.

Since the close contact in football creates a higher risk of transmitting the virus, the board is not allowing football players across the district to have their season. Many football coaches, players, and their parents/guardians are upset with their inability to play football for the upcoming season.

Harriton Football Seniors, Teddy Molineaux and Josh Cave, expressed concern because they are “unable to play football with their “second family” or use football as an “outlet from school and other problems.” Molineaux said, “we know the risks we take while we play, but we need football.”

The students at LMSD have spoken out as well. These differing opinions have created controversy. Many non-football players argue that the health risks associated with playing football outweigh the benefits to the players.

Harriton Seniors Anna Fenkel and Olivia Kim disagree with the football players’ protest in response to the district’s decision. “What are they even protesting for?” Kim asked, describing the protest as masochistic.

Fellow senior Enya Xiang voiced worry that, “the proposal of football players to get tested every two weeks doesn’t make sense; hospitals are lacking tests” and commented on how the protest was “coming off as highly insensitive.”

While many students and faculty members outside of the football community feel unsafe if a contact sport such as football continues in the pandemic, the football players will continue voicing their opinions in the hopes of returning to their team and the field this season.