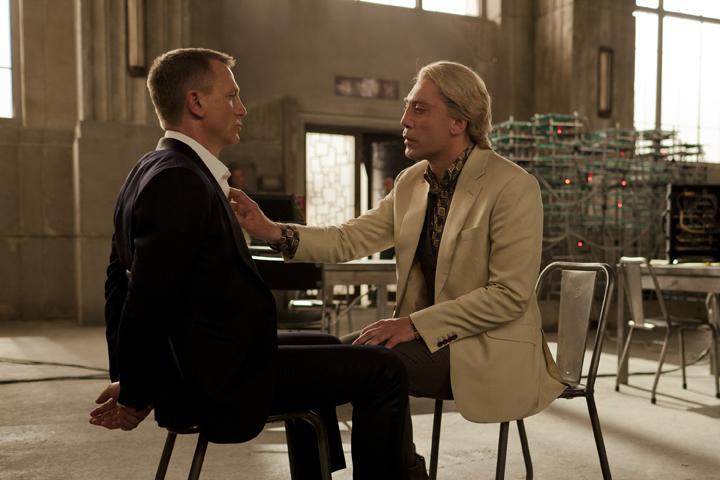 Skyfall presents a discourse about modernity and tradition, asking important and pertinent questions. “Are we safe? Who is the enemy? Do we have the means to combat them?” It also challenges culture within the context of the Bond franchise. The film’s antagonist, Silva (played by Javier Bardem), asks in one moment, “Where is the old Bond?”

The film challenges viewers to answer that question. The new Bond films are nothing like the old. While Skyfall radically departs from the old films in both its complex plot and method of presentation (the Craig films are very gritty and realistic by comparison to the Connery or Moore pictures), Skyfall fondly reintroduces some old faces like Q (Ben Whishaw) and Moneypenny. Still, the movie only briefly addresses nostalgia. “We don’t do exploding pens anymore,” Q reveals as he hands Bond his gadgets.

Skyfall doesn’t really answer its questions. The “good guys” barely win with both new and old trickery. Perhaps this speaks to the concept that no matter what the answers are, good will prevail. However, the film does occasionally challenge the lines between good and bad, though not enough to blur this statement.

The plot follows an attack on MI6 and the typical Bond-esque sleuthing that ensues, leading to a clash of two forces. Silva represents the new enemy, an enigmatic force of modernity that wages war against M (Judi Dench) and MI6, who represent traditionalist forces.

M’s techniques are growing old – at one point almost ending the life of an agent – and she is asked to resign. “I can’t until the mission is done,” she says stoically. We are also reminded of the world around MI6. “We’re in a democracy, we are held accountable to the people,” Ralph Fiennes’ character Mallory reminds M.

Cinematographer, Roger Deakins, lights the picture with class, providing some mystery at the beginning but ultimately settling for a realistic atmosphere.

Adele delivers the picture’s theme in a well-animated introduction that thematically outlines the story. It isn’t the best Bond song, but it beats Madonna’s.

The script is surely the best part of the picture, carrying with it both substance and charm. Bond is witty and there are plenty of well-referenced jokes. However, the most enlightening moments come from the dialogue from within the British government. Though it can beat the audience over the head at times, it still holds something that a lot of the other Bond pictures don’t, and while Bardem’s villain isn’t so well developed, (and he shouldn’t be, in order to remain an Assange-like symbol) and though some of the plot relies on assumptions that computer programs can do things like “leave breadcrumb trails” and hack into systems with programs that magically resemble the London underground, the script ultimately delivers.

Skyfall is a fresh and strong stand-alone picture, brimming with Bond-era nostalgia. It opens a substantive mediation, delivered strongly by the cast and crew. If you like the Bond franchise or a great action film, this movie is a must-see.