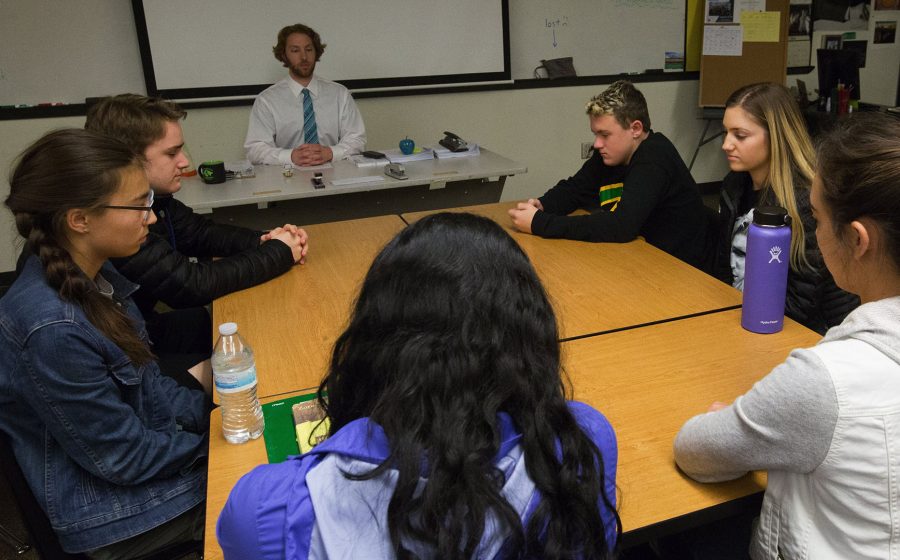 Roosevelt High students in Michael Magidman's class during stress-reduction Rider Time, named after the school's Roughrider mascot, in Seattle. With teachers sensing student's anxiety had reached a crisis level, they rearranged the school's schedule to add a 20-minute break every day, and weekly lessons on mindfulness. (Ellen M. Banner/Seattle Times/TNS)

Many believe that high school is a bubble filled with sleepless nights, midterms, finals, and the stress of getting into college. The amount of stress that we endure during our four years of high school can have a negative toll on us.

For example, chronic stress can disrupt the immune system or increase the chance of having a heart attack or stroke. But does stress affect different sexes differently?

In fact, studies have found that stress impact discriminates based on sex in such a way that part of the brain becomes larger in boys while smaller in girls, and that men try to withdraw under their stress while women search for social support.

The group that was exposed to stress demonstrated a change in the size and volume of a part of the brain called the insula when compared to the second group.

What is the insula? The function of the insula is to process emotions and to detect different signals that are found in our bodies.  When the insula changes in size, it can lead to  the development of Post Traumatic Stress Disorder (PTSD). PTSD is a mental disorder caused by a traumatic event. Some symptoms include reliving the traumatic events, irritability, insomnia, and fear.

Why does it matter if girls’ and boys’ insulae change differently if the same outcome is produced? It is crucial to know the difference because treatment can vary. Also, symptoms may appear in boys but might not show up in girls, and vice versa.

Furthermore, Dr. Klabunde told BBC news, “There are some studies suggesting that high levels of stress could contribute to early puberty in girls.”

In addition, Stephanie Pappas, a Live Science Contributor, found research in a journal known as NeuroReport that stated that men under stress show lower activity in brain areas responsible for processing other people’s emotions and facial expressions. But on the other hand, women that have experienced stress show more activity in those brain regions as demonstrated by brain scans.

Besides this, the way that men and women react to stress is different. For example, psychologist have noticed that men under stress usually try to withdraw while women search for social support.