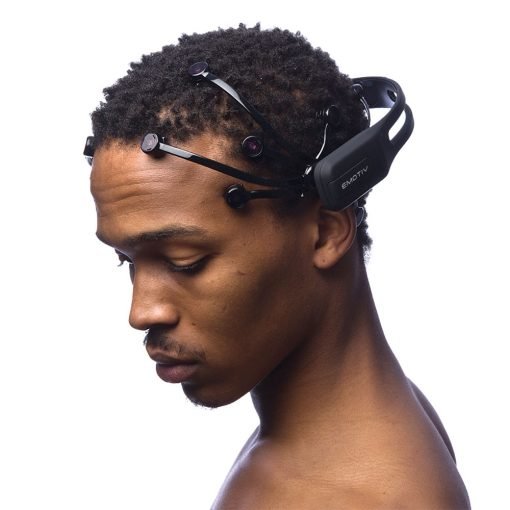 With our exponentially improving technology and industrially revolutionary gadgets, it’s safe to say that people are discovering and creating something new every day. Recently, the brain-computer interface (BCI) tech company Emotiv has developed EPOC+, the world’s first product that will move virtual and, eventually, tangible objects. How? By reading your brain, of course. The company has developed headgear that measures brain waves that indicate thoughts such as “move left.”

Whenever we feel emotions, have a thought, or make decisions, our frontal cortex sends out a series of neurochemical signals to other parts of our brains. The EPOC+ picks up these signals and measures them to create a model of one’s thoughts. This headgear resembles a band that wraps around the back of the head, with electrode sensors that cover the temples.

Everyone’s brain works differently. Therefore, EPOC+ requires the user to “hook” themselves into a virtual system: the user puts on the headgear and focuses on one of the given commands or thinks about an incident that makes them feel a certain emotion. This amount of concentration causes the client’s brainwaves to become irregular; their frequency and strength can be measured and interpreted as a virtual object. In addition, the EPOC+ will remember that brain signal, so hooking up to the system is no longer needed after the first time.

Emotiv’s technology passively reads human brain activity using detection algorithms that accurately read the intensity of different patterns, or thoughts, in a person’s electroencephalogram, or EEG. An EEG is a record of the oscillations of brain electric potentials picked up by the EPOC+’s electrodes. All of Emotiv’s devices are able to use these EEG patterns and turn them into binary digital signals using advanced algorithms. As of now, EPOC+ can detect six different emotions (jealousy, nervousness, happiness, anger, relaxation, and sadness) as well as five basic commands (move left, move right, move forward, move backward, and disappear).

These detection algorithms have been rigorously studied in Emotiv’s laboratories, where subjects were taken through experiences designed to generate varying levels of those six emotions. The company was then able to use these detection algorithms to develop a product that interprets brainwaves, or EEG readings, as mental commands. The EPOC+ headgear as well as other biometric measures such as blood pressure, heart rate, and eye tracking corroborated these algorithms’ conclusions.

However, the device would not be truly functional if it only picked up signals from the frontal cortex, as a large portion of brain activity is subconscious. A part of the brain called the limbic system controls the six basic emotions. Other parts of the brain interact to fulfill roles like long-term memory, basic bodily functions, and thought processing. These interactions are quite complex, but they must be measured if the researchers wants to create an accurate model of the user’s mental state, an endeavor in which Emotiv hopes to improve.

As of right now, EPOC+ can be hooked up to several computer softwares, including ones that model and/or maps your brain and its activity, measures brain waves, or moves around virtual objects. The first software developed was just that: a single cube in a virtual “room” that the user could manipulate with their mind. However, this relatively new technology promises to have many practical applications—it could detect the mental state of a hospital patient, enable advanced access to the disabled, serve as a major tool in an enhanced augmented-reality video game, or even serve as a tool in groundbreaking neurological advancements.

Although a few other companies including Neurosky and Interaxon have jumped in on the BCI bandwagon, Emotiv was the first to develop, produce, and patent a product using EEGs and brain signals. Emotiv currently offers two other products, EPOC Flex and Insight.