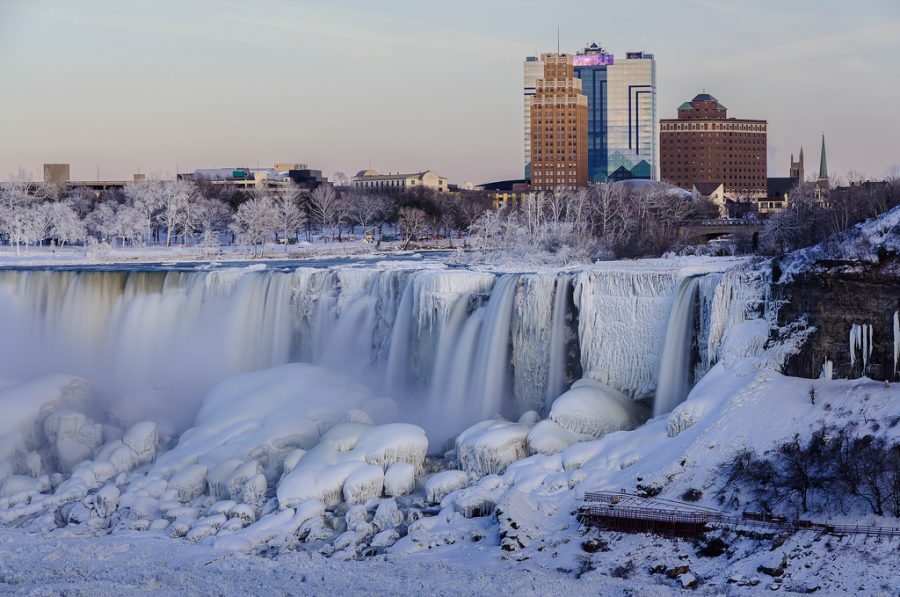 How do you turn boiling water into snow in a single, red-hot second? Go outside, and throw it in the air in Thief River Falls, Minnesota on January 31, 2019.

This past week, we witnessed an explosion of viral videos showing budding scientists doing exactly this, freezing their hair into elaborate Marge Simpson-inspired updos and flipping frozen pants high overhead, cheering as the pants land a perfect ten—with no gymnast inside.

In our township, we had our own celebration: sleeping in during a two-hour delay due to a “cold day.” Naturally, many of us sought to learn if this wonderfully unexpected gift could be expected to occur more often.

The culprit for this cold snap is the “polar vortex.” The National Weather Service defines the polar vortex as a large area of low pressure and cold air that surrounds both of Earth’s poles, weakening in the summertime and strengthening come winter.

The vortex is usually enclosed in a pocket by a “jet stream:” a narrow, variable band of strong air currents encircling the globe several miles above us.

America has been witness to cold pockets before. Often in the wintertime, warm air moves northward and weakens the polar vortex. This causes the vortex to expand and send cold air southward, pushing the jet stream through the midwestern region of the U.S. and enveloping the eastern region.

The western U.S. is usually impacted only mildly. Often, a part of the polar vortex can separate from the main body and travel south, as meteorologist Jeff Berardelli explained on CBS News.

Usually the vortex expands slowly. However, this past winter the eastern U.S. has experienced a relative lack of cold weather—until recently, when an entire section of the polar vortex split off and abruptly plunged south, deep into North America.

In recent years, meteorologists and other environmental scientists have developed a theory explaining the sudden split of the polar vortex.

Due to climate change, the Arctic is amplifying, or getting warmer, at two to three times the pace of the rest of the globe. Scientists theorize that the rapid amplification of the Arctic disrupts the jet stream so much that it causes the polar vortex to split and the jet stream to slow, then buckle, allowing cold air to move south and causing the recent, sudden cold snap.

A research paper published in the Journal of the American Meteorological Society provides evidence for this theory, which is still under development.

So what does this mean for the future, and how do we plan for it? Will we be flipping shorts in Bermuda soon? If climate change is indeed the culprit for this disruptive phenomenon, sudden bouts of extreme cold will likely become a common feature of our winters.

This weather can cause many serious health problems, but the most common are frostbite and hypothermia.

In cold weather, we are extremely susceptible to frostbite, which can occur in a matter of minutes. To retain heat, our nervous systems send signals for blood vessels to constrict and retract from the surface in our extremities (ears, nose, fingers, and toes).

Blood traveling to these extremities is instead directed to the brain to maintain its supply of adequate nutrients. A prolonged lack of nutrients and warmth from blood causes the tissue in our fingers and toes to degenerate. For these reasons, keeping toes and fingers covered and warm is essential in cold weather.

Staying out in extremely cold weather can also cause hypothermia, which occurs when the body loses heat faster than it can generate heat. Hypothermia is defined as a body temperature below 95oF.

Symptoms of hypothermia start with shivering and can progress to extreme fatigue, confusion, and clumsiness. Left untreated, hypothermia can lead to complete failure of the heart and respiratory system. To prevent hypothermia during cold weather, it is crucial to dress in warm clothing and stay indoors as much as possible.

On February 5, 2019 we lingered outdoors, enjoying the picturesque, 66-degree weather. This turnaround in temperature comes as a relief to many.

Nonetheless, the extreme weather fluctuations that just took place across the U.S. were a wake-up call from hibernation, a nudge for us to pay attention to our surroundings and our personal responsibility for our impact on the environment.

As residents of Thief River Falls, Minnesota celebrate surviving this polar vortex, our scientists and policymakers are challenged with creating an effective response to this global problem, one that requires collaboration with all countries. Ideas must flow freely, lest progress should freeze in its tracks.