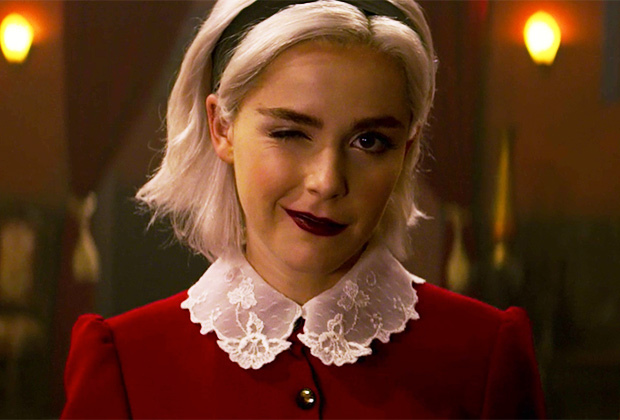 Whether from the classic Archie Comics or the nostalgic ‘90s teenage TV series, the story of Sabrina the Teenage Witch is one that you’ve most likely heard. Now, Netflix has decided to put their own spin on this iconic story with its new original series, The Chilling Adventures of Sabrina.

The basic plot of the original series returns in this reboot: Sabrina is a teenager with magic powers who lives with her two witch aunts in a small town. She tries to navigate life with regular humans while also being pulled into the world of witchcraft. Beyond that, the show strays from its predecessors.

The new series places the titular character, played by Mad Men’s Kiernan Shipka, into a much darker and bleaker world than the previous installments. There is an obvious shift in the show’s tone, with dimly lit scenes and a grim color palette that conjure an instant unease.

Additionally, the issues that Sabrina faces are much more dire, from an exorcism to backstabbing teachers. Sabrina’s main dilemma is whether to sign her name in the Book of Beasts, which denotes a devotion to the Dark Lord, or continue her day to day life with her friends and boyfriend, Harvey Kinkle (played by former Disney Channel star Ross Lynch).

The show also features strong and enjoyable performances by Miranda Otto and Lucy Davis as Sabrina’s aunts, Zelda and Hilda.

Although only being released a little over a month ago, The Chilling Adventures of Sabrina has already sparked controversy. The infamous Satanic Temple sued the show for using the deity Baphomet in several of its scenes. One of the leaders of The Temple, Lucien Greaves, took to Twitter to say that they would be taking legal action, believing that the series appropriated their “copyrighted monument design to promote their asinine Satanic Panic fiction.”

A few weeks ago, it was announced that the $50 million lawsuit had been settled. The other agreements of the lawsuit are mostly classified, although we know that Netflix must include a brief statement that acknowledges the different aspects of the statue into the already released episodes.

I found this new series, though sometimes predictable, very enticing and thoroughly enjoyable, especially when compared to some other, similar reboots. Furthermore, the acting was surprisingly good and the characters were interesting and genuine.

Also, the stylistic approach taken by the directors, cinematographers, set designers, and costume crew was definitely one of the more enjoyable parts of Sabrina. These provided for a gloomy and alluring reboot while also allowing for a fun family experience.

Younger people who are interested in a teenage storyline with mystery and intrigue can enjoy it just as much as older viewers who are already familiar with the story.There are definitely parts of the show that drone on, but when Sabrina is in charge, leading the way and tackling death-defying issues, the show soars.

Luckily, we didn’t have to wait another year or so to see more of Sabrina. On December 14th, a Holiday special was released entitled “A Midwinter’s Tale.”