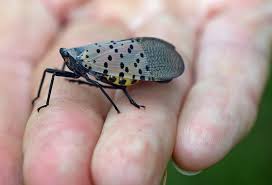 Whether you’re at home, at school, or even at the dentist’s office, you’ve probably seen a spotted fly, and your first instinct—after cooing at its artsy wings— was probably to swat or stomp on it. Recently, these pests have inhabited Harriton’s courtyard and begun to dominate the outdoors.

The spotted lanternfly, scientifically known as lycorma delicatula, is an invasive insect species in southeastern Pennsylvania. Adult spotted lanternflies are about one inch long, and are spotted across their grey forewings and red hindwings. They are native to Asian countries such as India, China, and Vietnam.

While it is not known exactly how this species made their way to the states, one lantern fly bringing a sack of eggs could’ve started this entire epidemic.

Spotted lanternflies first appeared around 2014, in Berks County, Pennsylvania but have since spread to other counties in PA, such as our very own Montgomery County. To prevent the infestation, the Pennsylvania Department of Agriculture has told people living in the quarantine zone to check their vehicles and property before travelling out of the zone, and to do their part by killing these insects and removing their eggs on sight.

Why is this an important move? Killing the insects may seem harsh, but without this measure in place, the lanternfly infestation could grow and spread to other parts of the state, and pose a threat to local agriculture.

According to the University of Florida, spotted lanternflies feed off on tree sap from over 25 different known host trees in PA, and cause these trees to ooze sap, wilt, and eventually die. The lanternflies also excrete honeydew, which promotes the growth of black mold on trees, preventing leaves from completing photosynthesis.

And to give you an idea of the extent of the problem, female lanternflies lay around 100 eggs each annually.

At Harriton, the spotted lanternfly infestation has become a prominent issue compared to years prior.

In fact, one sophomore student, Julie Wright, agrees that, “Although spotted lantern flies are the center of many memes and such, they do pose a serious threat to native Pennsylvania wildlife and vegetation.”

Julie and countless others have agreed that the spotted lanternfly invasion has truly become more serious over the past few months, especially since coming back to school.

Spotted lanternflies have gained quite a reputation over the last few years for destroying local agriculture, but efforts have been made, and are still being made, to control the spread of the species and limit their effects. Researchers at Penn State and Cornell are working on developing biopesticides from fungus that could be applied, likely aerially, to kill the bugs.

To do your part, look for signs of egg masses on trees (white, putty-like sacs) and scrape them off. Lastly, feel free to squash, stomp, and smash them whenever you can.