A Tribute to Gerard Putz, The Founder of Science Olympiad 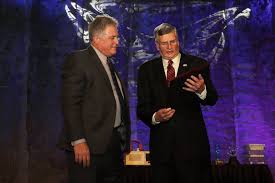 He had many notable accomplishments in his life ranging from the pride in his children to the years he taught in the Detroit Public Schools, but he will be most remembered, perhaps, for the work that he and his colleagues, beloved wife Sharon and educational partner Jack Cairns, are most famous for: the creation of the increasingly popular Science Olympiad competition.

Founded in 1984, this was a competition testing students’ abilities in STEM fields (Science, Technology, Engineering, Math) to battle for victory by taking tests, building contraptions, and participating in labs. This rigorous competition is considered to be among the most prestigious of middle and high school science competitions, holding a national finals tournament at a renowned university every year.

Our own Harriton SciOly team has competed every year for the last 28 years garnering 18 regional titles, 23 state titles and 3 national titles, with 25 finishes in the top ten in the 28 year history of Harriton’s participation in the National Olympiad Competition.

But Putz began encouraging students to explore STEM fields long before founding Science Olympiad. Upon earning a Bachelor’s Degree in Science from the University of Detroit, Putz served for a period of time as an active duty soldier in the U.S. Army, followed up with a Master’s Degree in Liberal Sciences from Wesleyan University, and then a Doctorate in secondary education from Wayne State University.

His first job was teaching high school biology students in the Macomb Intermediate School District (MISD), and he held this position for more than 30 years in his home state of Michigan.

Putz believed in the advancement of scientific minds of youth based on the principles of his classroom teachings, prompting him to create a competition setting for bright minds interested in STEM fields.

As we move on, having lost a man who promoted national youth interest in STEM fields and created the base for one of the most successful clubs at Harriton and all over the country, we wish the team luck as they compete in this year of remembrance.

Good luck to Harriton SciOly as they go off to the Science Olympiad Regionals once again. Go Rams and honor the spirit of Gerard Putz!