Ram of the Week: Adam Gilbert 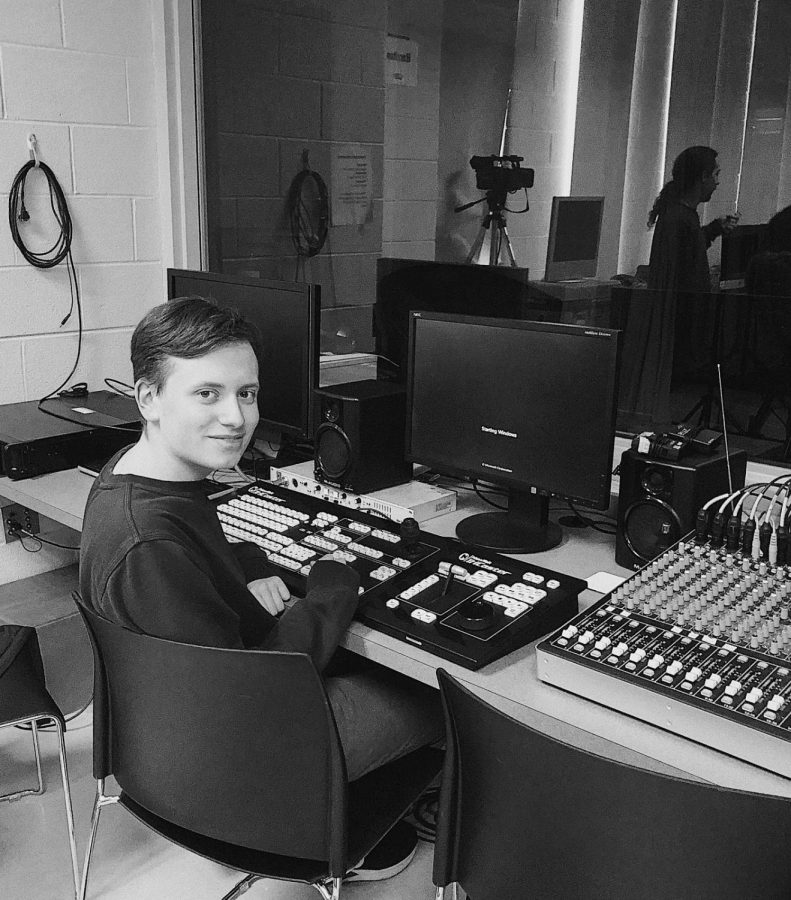 If you’re reading this, you’re probably shaking your head, trying to figure out where you know the name. Adam Gilbert? Oh right, that’s the Tech Guy! You’re right: Adam Gilbert is the kid in the headset, the kid running around behind the scenes, the freshman who is already rising the ranks in the tech world of Harriton.

If you know Adam, you know that he’s modest. He’d never say it himself, but he’s a tech genius. Even back at Penn Valley Elementary School, when the phone rang in Adam’s classroom, the calls were always for him with the same question. Would Adam please come and fix a teacher’s Smart Board? Back when the rest of us were playing with fidget spinners and Thinking Putty, Adam was already a big-wig in the technological world of Penn Valley. But this trend didn’t stop there. Adam continued to rise up behind the scenes throughout his time at Welsh Valley, and is now doing the same thing at Harriton. But before diving into Adam’s achievements this year, it’s time to ask the real question. Who is Adam Gilbert? Keep reading to find out.

How did you get involved in software and how did you build your technical ability?

I started a while ago, but I don’t know the exact year. I went to a summer camp at Villanova, and I learned basic Java. From there, I realized that this was something I was really interested in. I began to teach myself the things that they hadn’t taught me at camp. I haven’t had to use online courses– I just teach myself. I think I can do that because I am able to look at a problem and say, this is the best way to solve this problem. And if I can’t solve it, I know what to research to figure it out. I was able to teach myself all sorts of coding languages, such as Python, Java, PHP, C++.

Are your parents pushing you or are you self motivated?

My parents really don’t understand what it is that I do. But they do support me, even though when I tell them about it, it’s gibberish to them. But, as long as I’m happy, they’re happy, and I’m really lucky to have that.

What clubs are you involved in?
I’m in HHS TV, Student Council, TSA, and HTC.

How is Freshman year treating you? Are you stressed?

Yes, very stressed. Freshman year is a lot of hard work, but I think it’s honestly manageable. It’s not the worst, but it is definitely more difficult than middle school.

Do you struggle to manage your time?

Yes, and Sam Catania can attest to this. He constantly has to remind me to do something when he wants it done because I tend to procrastinate a lot on things.

How much time each week would you say that you spend working on projects behind the scene at Harriton?

Math, let’s see… Probably like an hour or two every day after school, so I’d say around 10 hours a week.

During the interview, I realized that I was in the same boat as Adam’s parents. I was still left wondering, what is it that Adam actually does for those two hours every day? What has he accomplished this year? And who helps him? I had so many more questions.

Adam spent most of his time in January and February working on Harriton’s very own Dr. Harriton. His name appeared in the program three times, under audio/ visual TV crew, lighting, and sound. While working behind the scenes to make the show as spectacular as it was, Gilbert also took on a more business management role in the workings of the show, earning himself a hearty round of applause during the curtain call. And he didn’t do it alone.

So I was approached by Sam Catania back in November of 2019, when he told me that the Student Council needed a good website. From there, we began to work on a website, which became the one that is public now. One of the features that we wanted for the website was the ability for it to be like Snap Raise, a website that helps programs effectively meet their fundraising needs. And the reason we wanted to do that was because Snap Raise takes a pretty hefty cut of how much money you make, sometimes 25 to 50%. We put on Dr. Harriton for a good cause, and we didn’t want to lose so much money to the website. That was why we made Clap Raise, pretty much a clone of Snap Raise.

What are you most proud of this year?

Definitely how much Clap Raise was able to raise for the grand total of Dr. Harriton. It made at least $10,000 on its own, and I didn’t think that my own little application could do something like that.

Do people listen to you even though you are a freshman?

Oh definitely, because people think that if they don’t respect me, I will find a way to hack into their laptops and delete their files. And other people know that what I have to say is important to what’s going on. They know since I was able to create something like Clap Raise, that I am able to do effective things.

Where do you see yourself as a senior?

I don’t know. That’s tough. It depends on what happens between now and then, but I definitely want to run for an office position my junior year and bring a new Dr. Harriton to the table. Even if I’m not elected, I would want to find a way to make a Dr. Harriton like no one has ever seen before.

What is your favorite thing to run behind the scenes?

Well, I either like to do HHS TV jobs, such as running the TriCaster, but I also really like lighting(that’s what I do at HTC).

Do you have a mentor in school? Who are your role models?

Sam Catania and Graham Branscom. I’ve worked with them very closely since the start of the school year. And also Mr. Mansor, he’s the computer science teacher, and he’s been a huge help in creating some of the things that I’ve done this year.

Dr. Harriton isn’t the only school event that Adam was dedicated to this year. Gilbert is also one of the main students involved in Harriton TV. He runs the technical aspects of the Ram Report and sometimes produces reports that will be watched by the entire student body during advisory, a job that requires weekly dedication. Gilbert’s love for all things tech isn’t going to stop after he graduates high school, as he already sees himself working with computers outside of Harriton.

Where do you see yourself after high school?

I definitely want to try to go to a computer science based college, whether MIT or something else.

If you could pursue another path outside of technologies what would it be?

What kind of question is that? I’ve set myself so far into the technologies that I don’t really know if I could just switch what I’m doing. Business management maybe, but that and computer science go hand-in-hand.

What do you do in your free time?

I spend a lot of my free time working on projects like Harriton.org. I’ve also been working for a few years on Endless Hosting, a company that hosts websites.

Is this freshman the next Bill Gates or Steve Jobs? Only time will tell, but keep your eyes peeled, Harriton, because Adam Gilbert is headed somewhere big.