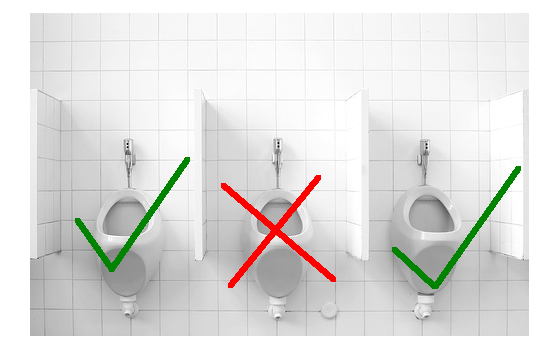 After drinking three whole bottles of Gatorade, sophomore Nate Bartley rushed to the Greenfield Senior High School–in Greenfield, Delaware–bathroom in between classes, in hopes of relieving his full bladder. When he finally reached the bathroom, he was stunned to see chemistry teacher Mr. Goldman peeing in the middle urinal.

“There were three perfectly good urinals in that bathroom,” Bartley reported, “but Mr. Goldman just had to use the middle one, rendering the first and third useless!”

For a fraction of a second, Bartley actually considered relieving himself in the wall-mounted plumbing fixture that stood next to his teacher, but immediately came to his senses and remembered the unspoken law of public bathrooms: never pee next to another person in the urinals.

The only two locations left were both next to Mr. Goldman! Bartley was left at a stand-still. All he could do was stare like a deer in headlights at Mr. Goldman’s unbuckled brown belt that bordered his navy blue khaki pants and salmon-colored button-down shirt.

Mere minutes passed before Bartley finally decided to act. He checked the bathroom stalls, but to no avail; they were all occupied. Eventually, he accepted his fate. In resentful disbelief, he sighed to himself, “wow, I can’t believe it has come to this,” before leaving the bathroom and promptly peeing his pants.