Your Guide to Quarantine Must Reads 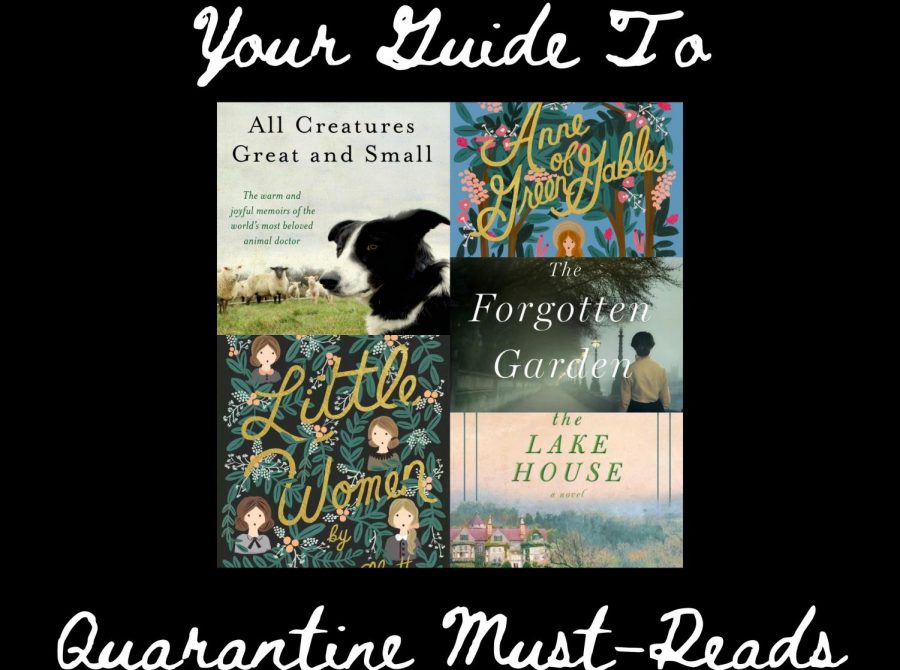 Everybody has their own favorite genre, but these truly exceptional books are universally beloved because they speak to everyone. If you want a feel-good book about cute animals and hilarious friendships, books that follow characters’ lives as they change and grow, or a thrilling page-turner, look no further.

I love books and I have read a lot of them, so I can vouch that these are some of the best. When quarantine is getting you down, or you have a little bit of free time to fill, grab one of these beautifully written masterpieces, and get reading. Your life won’t ever be the same.

Little Women is probably the classic of all classics, and rightfully so. This 152-year-old book still relates to readers universally, and the language is still completely understandable, if a little old-fashioned.

In Little Women, four sisters—Meg, Jo, Beth, and Amy—battle together through the hardships they are facing with their father away at war, and very little income coming into their household. The relationships between the sisters, as well as with their mother, develop incredibly as they journey from childhood to adulthood throughout the course of the book.

The first half of the book shows their childhood: their fights, their passions, and their hardships. The second part shows their adulthoods and where they will go in life: their loves, their losses, and their roads ahead.

It’s a beautiful book about the values of family and friendship, and a read that will tug on your heartstrings. It is funny, beautiful, poignant, and incredibly bittersweet, and when you put the book down, you will be completely satisfied.

All Creatures Great and Small, All Things Bright and Beautiful, All Things Wise and Wonderful, The Lord God Made Them All – James Herriot

The James Herriot book series is not as well known as some of the books listed, but it is definitely a must-read series. Herriot, a veterinarian in Yorkshire, England, writes about his experiences in this collection of memoirs, set in Yorkshire in the 1930s -50s.

It is a feel-good series, filled with hearty laughs, funny anecdotes, and exciting adventures that involve saving animals in blizzards, in the middle of the night, and many other wild incidents. The book series covers James Herriot’s youth, when he lived with his boss, Siegfried, and his boss’s brother, the playboy Tristan, and the hilarious moments of their bachelorhood together.

The reader becomes truly connected to the three friends, hoping that Jim ( Herriot) ends up with the girl he continuously pines for, Helen. Jim’s usual patients, such as Tricky Woo, a pampered pup who is constantly ill because he is overfed by his rich owner, quickly become fan favorites for readers.

The landscapes described are beautiful and the characters are incredibly vivid. James Herriot has written other books also, but I strongly suggest reading the books listed above, as the others are mostly repeated tales from the series.

Even though Ms. Montgomery was Canadian—and the book series is set in Canada—the books have an old-timey British feel. Fun fact: Lucy Maud Montgomery was the first Canadian woman to join the British Royal Society of Arts, and Anne of Green Gables is the reason why.

The book follows Anne Shirley, a red-haired orphan who moves in with Marilla and Matthew Cuthbert, two elderly siblings who live in a beautiful house called Green Gables on Prince Edward Island in Nova Scotia. They were expecting a boy to help them with their farm work, but they soon grow to adore rambunctious Anne, whose vivid imagination also gives her a knack for getting into trouble.

The reader follows Anne’s hilarious misadventures through Avonlea, her new town, as she gets to know the eccentric townspeople, such as Mrs. Lynde, the town busybody; Diana, who becomes Anne’s best friend and a fellow “kindred spirit”; and Gilbert Blyth, a boy in her school who instantly rubs Anne the wrong way.

The descriptions of the island are beautiful, as well as Anne’s descriptions of all that she sees. Following this first book, there are quite a few others, including books about Anne’s children when they are fully grown, but they do get a bit tedious to read as Anne grows older.

The Lake House is a beautiful and enchanting book, set in Cornwall, England, where an old manor house called Loeanneth has sat abandoned and undisturbed since the 1930s.

Sadie Sparrow, a detective in the 2000s, is in Cornwall for a “holiday” with her grandfather. In reality, Sadie is fighting away at her own demons: an unsolved case from work that won’t leave her in peace, and a letter that has arrived along with a punch straight from the past.

When Sadie finds Loeanneth 70 years after it was abandoned, overgrown and forgotten about, but perfectly preserved inside, her curiosity is instantly sparked. Soon she learns that the Edevane family once lived at Loeanneth, but they left after a party on Midsummer’s Eve when their eleven-month-old son, Theo, went missing.

He was never found. The book switches mostly between the perspectives of Sadie, who is trying to solve the case, and Alice Edevane, the middle child, who is now an older woman and a famous mystery writer. Alice, along with her older sister Deborah, have their own suspicions about what happened to Theo that night long ago.

As their paths cross and memories slip into the past, there are many different leads that come up for the reader, before the infinite number of plot twists make the unsolved case and the many long-kept secrets just as mysterious as they were a hundred pages before.

Not to mention Morton’s breath-taking imagery, which will keep you in its grasp till the end of the novel.

The Forgotten Garden is the first Kate Morton book that I read, and quickly became one of my favorite books of all time. This haunting mystery novel revolves around the story of Nell, a little girl who is abandoned on a ship heading for Australia, with nothing but a suitcase and a book of fairy tales.

When she is 21, Nell finds out what happened when she was a child and sets out to find out who she is. But while Nell tells some of the story, most is told by her granddaughter, Cassandra, who continues the journey after Nell passes away, still determined to figure out who Nell was.

The story is also told by Rose and Eliza, two cousins who lived at Blackhurst Manor on the Cornish coast in the early 1900s. Rose is the daughter of a wealthy man and his strict and forbidding wife, while Eliza is the daughter of Rose’s father’s sister, who has passed away.

The two cousins are as different as can be. Rose is fragile and naive, while Eliza has lost everyone she cares for, and has grown to find solace only in her imagination and her stories. There are many questions left unanswered throughout the book.

How did Cassandra come to live with Nell? Why was Nell abandoned? How is Nell related to Rose and Eliza? Who is Nell’s mother? What happened to Rose and Eliza after their chapters in the book end? There are a hundred secrets left buried at the old stone manor by the dark rocks and crashing waves.

And there are a hundred perfectly constructed plot twists that will keep the readers from figuring out the entire plot until the very bittersweet end of this gripping novel.