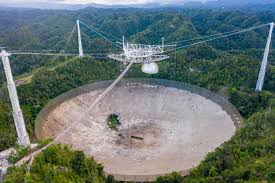 The world’s second-largest single-dish radio telescope, the Arecibo Telescope, collapsed on December 1st, 2020. This previously-damaged observatory is located in Arecibo, Puerto Rico, and is owned by the United States National Science Foundation (US NSF).

The structure’s main collecting dish was an inverted spherical dome, which was 1,000 feet in diameter, built inside a sinkhole formed from the dissolution of soluble rocks called karst. The dish’s surface was made of 38,778 perforated (pierced with holes) aluminum panels, each about 3 feet by 7 feet. These panels were supported by a mesh of steel cables, and the ground beneath supported limited-sunlight vegetation.

A video of the telescope collapsing was posted on Youtube on December 3rd, 2020, with sympathetic comments in a youtube video sharing the crash.

It would be an intensely ambitious task for the government to replace the telescope, and an exceeding amount of time to execute the mission. Arecibo Observatory was Earth’s most powerful planetary radar system. The data that these systems provide give scientists the details about an object’s size, shape, and location, so they can quickly evaluate the potential threat asteroids present to Earth. Without this helpful structure, astronomy and the world itself could permanently change.

This collapse did not come as a surprise since numerous hurricanes damaged parts of the telescope previously; two cable breaks, one in August of 2020 and a second in November of 2020, which already jeopardized the structural integrity of the telescope.

The NSF determined in November of 2020 that it was safer to decommission the telescope rather than attempt to repair it, but the telescope collapsed before a controlled demolition could be carried out. The remaining support cables from one tower failed around 7:56 a.m on December 1, 2020, causing the receiver platform to fall into the dish and collapsing the telescope.

Weeks earlier, the NSF officials claimed they did not see the wire collapses as major problems because the weight it was carrying was well within its design capacity, and now they have been proven incorrect.

The cables that broke at the observatory helped support a 900-ton platform of scientific instruments that hung above the main telescope dish. The first cable slipped out of its socket and smashed panels at the edge of the dish, while the second broke in half and tore huge slashes in the middle of the dish.

The main cable, which was installed in the early 1960s, was degrading over time, so the external review committees pushed to maintain the aging cables. Only recently did these committees start following their maintenance schedule.

So, what is next for this telescope? Will engineers replace the structure? Will studies pause in the meantime due to this loss? It is hoped that the telescope did not cause irreplaceable damage to the world of astronomy, but only future research can provide these answers.