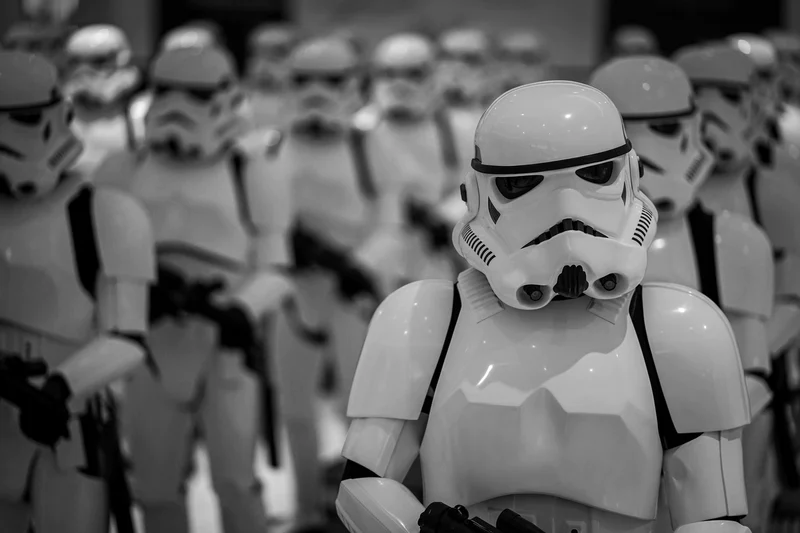 After watching the first episode of The Mandalorian, I decided to rewatch all of the Star Wars movies and compile my top five list (spoiler alert):

5.) A New Hope: A New Hope is the introduction to Star Wars. Although the graphics are horrible (it was 1977), we meet all of our favorite characters. Tarkin is one of my favorite characters, and Obi Wan’s sudden disappearance fascinates me. We meet an old Obi-Wan in isolation and follow Luke throughout the beginning of his journey. As we watch Vader destroy Obi-Wan, we also get to see him destroy the Death Star.

4.) The Empire Strikes Back: This is a great movie, but the story is not the best. The viewer is introduced to Lando Calrissian, Yoda, and we get more time and action with Vader and Obi-Wan. We watch Luke confront Vader, which is amazing cinema and one of the most well-known scenes of all time. We learn that Anakin is Vader and Luke’s father. Meeting Yoda is a funny and adorable experience. We get to see him train Luke and give him some of his 900 years of wisdom.

3.) Rogue One: The viewers meet characters who all end up dying off, but we also are shown some great acting, visual effects, and funny moments. The tall droid is probably the most adorable part of the story, but the rest is sad. Jyn Erso finally sees her father after not having any family for most of her life, but she loses him and ends up losing her life for the rebellion.

One of my favorite parts is when the characters are on the desert planet, receiving the fault in the Death Star and finding a pilot, where we see the Death Star completely obliterating a corner of a planet. The viewer is introduced to the Galactic Rebellion weeks before the destruction of the Death Star and a CGI version of Grand Moff Tarkin.

Seeing Darth Vader and his palace on the Mustafar System is an amazing experience. The Death Star, Star Destroyers, and the lush green and beach like blue planets are what carry the movie, but the ending pulls the movie a mile past the finish line. In the end, we get teased with a remake of the beginning of A New Hope as Vader pushes through the rebel vessel to get the plans, killing everyone. I could not stop thinking about the scene for weeks after the movie.

2.) Return of the Jedi: Unpopular opinion for many people who rank the movies since they choose The Empire Strikes Back just for the ending, but I think that every part of this movie is amazing, especially the actors and the story: a 10/10.

Although the graphics are not as good as Rogue One, as it was made nearly thirty years earlier, the story takes my breath away. Every time I watch it, it gives me this excitement when Luke faces his father and tries to defeat the dark side in himself and defeat the Sith together.

The Lightsaber battle at the end could be a bit better if it were made 20-30 years later. The emperor is so evil and Vader is so dangerous that it is amazing seeing them together and then seeing Vader betray his master.

1.) Revenge of the Sith: This movie is beautiful as it transitioned into the original movies. We watch the birth of Luke and Leia, the rise of the empire, and the emotional ending of young Anakin Skywalker, who becomes seduced by the dark side.

From beginning to end, the movie is intense, action-packed, and an emotional roller coaster. All of the actors are amazing, (except for Jar Jar at the end), the CGI is exceptional, and the movie made me cry. Hayden Christensen and Ewan McGregor perfectly play Anakin and Obi-Wan.