The Significance of the Destruction Caused by Hurricane Ida 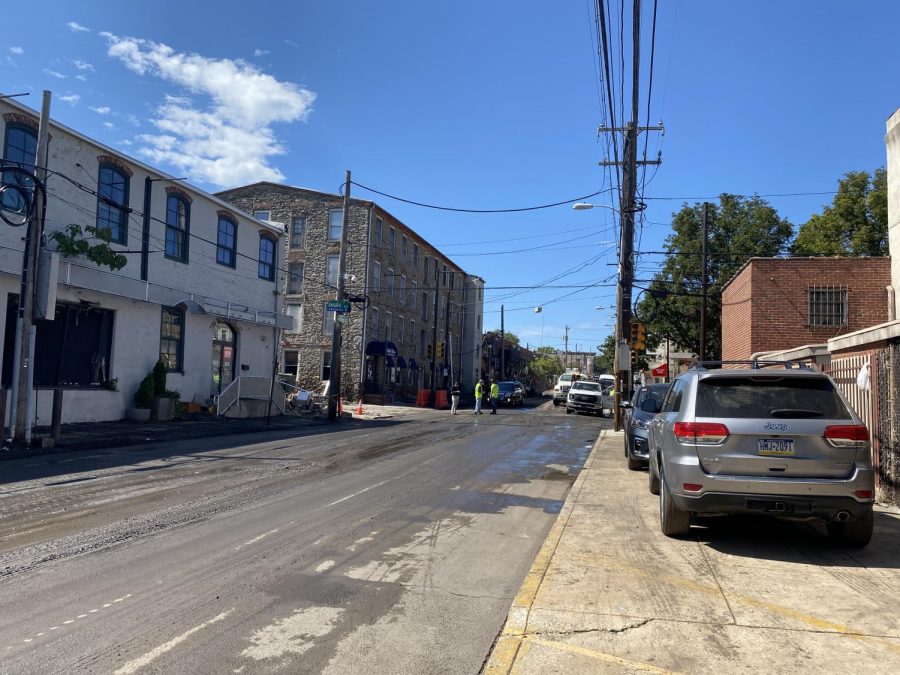 “It’s everywhere, everywhere that you look there is storm debris,” says my dad.

Biking through the streets of Manayunk, the destruction caused by Hurricane Ida is painfully clear. Large construction machines scrape down the bumpy streets, scooping the invasive piles of muck and mud. I shift my gears in an effort to push through the mud, inhaling the dust passing by. Retail stores and restaurants, parking lots and housing; nearly everything below the high waters was swallowed by Hurricane Ida.

My journey continues to the East River Drive, where the sidewalk is coated in mud, and a musty stench envelopes the streets. Lights are uprooted out of the ground, the old walls are crumbling, and trees barricade the support beams holding the highway above the riverbed.

Biking through Temple’s Boathouse, my tires give out, and I anxiously walk through the muck-filled lot by foot. The boathouse, including the twenty-foot-tall trees surrounding it, is almost entirely covered in dirt and debris, exposing the incredibly high water-levels at the height of Hurricane Ida. According to 6abc, “The river crested at 16.35 feet. The previous record for the highest crest for the Schuylkill River in Philadelphia was 17 feet back in 1869.” 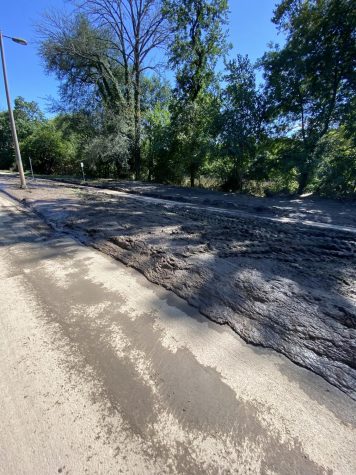 The area of Philadelphia that I journeyed through will be impacted by the damage from Hurricane Ida for years to come. Innumerable houses, businesses, and shops were flooded and left without power for days. Sports games were delayed, and community locations were destroyed along the Schuylkill River. On top of this, debris from the immense destruction was pulled into the Schuylkill, further contaminating the already toxic river. According to The Wall Street Journal and firm CoreLogic Inc., “Including damage that was uninsured… on Sept. 8 estimated Ida’s total losses at $43 billion to $64 billion nationally.”

Unfortunately, as a direct result of the COVID-19 pandemic, businesses have struggled to survive and lack the means to rebuild from the untimely and unexpected arrival of the flood. CBS3 quoted Monica Mitchell, owner of Clairvoyant Monica, who described the unimaginable challenges she has faced due to Hurricane Ida. She explained, “‘Our regular business insurance doesn’t cover it, flood insurance was over $1,000 a month,’ she said, adding, ‘Especially with the pandemic, I couldn’t afford it. No way in the world I could afford it and a $3,000 deductible.’”

In this article, we will take an in-depth look into the storm’s effects on businesses and individuals in Manayunk, as well as the Harriton community. This devastating event should stay in the forefront of our minds, as the destruction caused by Hurricane Ida will plague the Philadelphia area for years to come.

How Were Businesses in Manayunk Affected by the Flood?

In an interview with the Executive Director of Manayunk Development Corporation, Gwen McCauley, and her team, I hoped to find an answer to this question. They informed me that there is “$27 million in damages and this does not account for the 2 miles of TowPath trail or the CVS which needs a complete overhaul.” Ms. McCauley also stated that, “The biggest issue by far was electricity. When the river crested at 16.35 feet it entered the parking lots, the trails, Main Street and ultimately the buildings along Main Street. PECO Electric came into the area along with PGW and they pulled all of the meters on properties that saw flooding for emergency reasons. In order to get reenergized, these properties had to update their entire buildings electrically and get inspected prior to reopening. This has proven to be a real task for some of the property owners. Especially a chore to the buildings that are very old.” Fixing the electricity crisis requires time and money, which many businesses are unable to invest. To compensate, several businesses must find a way to 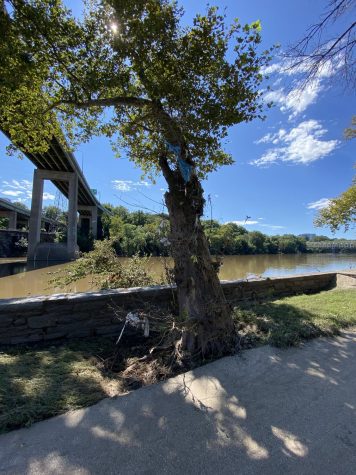 work around this issue, which can come with additional costs and delays for reopening.

Additionally, Ms. McCauley stated that, “many are finding their insurance companies are not covering costs and they are looking for loans from the Small Business Administration to cover costs as our area was declared a disaster area from President Biden. The process of recovery is slow for the hardest hit. The trails reopened at the end of October and we are grateful as that reopens the access to for customers who are coming to visit through the Schuylkill Trail System. We need to remember that the businesses that saw none or marginal flooding are still affected. Customers avoid the area and assume all are damaged. This hurts business sales for all.”

Small businesses located in Manayunk are struggling following Hurricane Ida; even stores and shops that were not directly under water were affected. The students of Harriton, as well as all Lower Merion residents, must recognize businesses’ need for support at this difficult time and continue visiting and supporting this community.

How Were Those Living in Manayunk Affected by the Flood?

Stores and restaurants in Manayunk were not alone in flood damages; homes and families suffered from Hurricane Ida as well.

When Peter Martin woke up in his apartment in Manayunk, which he moved into earlier that year in March of 2021, he was entirely unaware that his apartment building was surrounded by rising water. Mr. Martin shared with me that, “at 6:30 in the morning, the power went out and I got an alert that my alarm system was on backup. I woke up–it was just me and the dog because everyone else was at the shore house–and I took the dog for a walk on the sidewalk and he was really bizarre acting like he knew something was wrong the way the water was. So we came back up the stairs and the sidewalk was gone.” Mr. Martin was one of many in the Philadelphia area who came to realize that his home would never look the same. 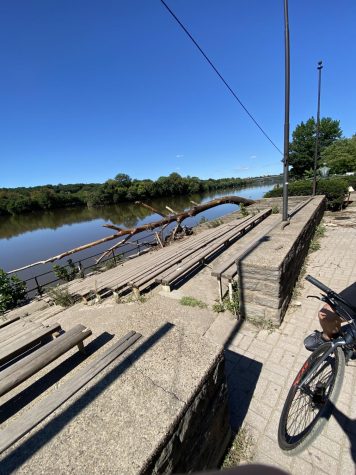 Water levels climbed at record speed. According to CNN, “The city of Philadelphia is reeling after its Schuylkill River rose 2 feet above a major flood stage. Our CNN weather team reports the Schuylkill River in Philadelphia was at 15.88 feet at 8 a.m. ET today. That is almost 2 feet above the major flood stage, which is 14 feet.” CNN later reported that the river rose 12 feet in only 8 hours between 4 p.m. and midnight ET, slowly swallowing part of Manayunk in the darkness. Fortunately, many homeowners like Mr. Martin managed to escape before the rising waters caught up to them.

Mr. Martin explained to me, “I decided to leave with Benny [Peter’s dog]. So I packed him up and we drove to the bridge by Leverington street and it was all flooded on the street but there was a little bit of room on the sidewalk to drive my car. I hit the button that lifts the car and I drove to the top of the ridge and got on the expressway.” He continued, stating, “I think I was the very last person on the Vine Street expressway because I got on it at 15th Street, and I ended up taking Poplar [Street] to 15th [Street] and got on the Vine Street Expressway. I looked behind me and there was no merge. ‘Where is the traffic?’ That whole Vine Street became a bathtub… Then I went to the Jersey Shore. I took the high road most of the time and only experienced high waters when I was leaving my development.”

Peter was fortunate that the water did not flood his home, saying, “The water almost reached the development, fortunately, it was higher than the water by around two feet.” He lost power and the internet for around twelve hours. Thankfully, his phone alarm rang so he woke up just in time to escape the flood; had he slept any longer, he would have been stuck at his house. According to WHYY and Poweroutage.us, “All of eastern Pennsylvania remains under a Flood Warning. More than 67,000 customers statewide remain without power.” Across the region, Peter and many others suffered the consequences of this massive, unforeseen flood.

How Was the Harriton Crew Team Affected by the Flood?

In addition to houses and businesses, some of the buildings damaged in the flood included the famous Philadelphia boathouses. With the unfortunate damage to the boathouses, a part of the Harriton community was directly impacted: the Harriton Crew Team.

The Harriton Crew coach, Stephen Lindeman, explained to me that, “The flood affected the start of the season and pushed back our start date about a week from when the crew team was supposed to be down here. Some good did come out of it where the whole team got down here and got together and cleaned everything by hand ourselves. So that kind of brought some team unity in at the beginning of the season. Even though we were pushed back a week, they kind of did what we would start our first week of practice with anyway so everyone would get comfortable with each other. But other than that, now we have everything cleaned up thanks to the hard work from the parent board and the rowers and the coaches. Now we’re hitting the water and the season is underway.”

While the Harriton Crew Team may have found a silver lining in the damage caused by Hurricane Ida, the destruction caused by the storm is still prevalent and is a major problem in the Philadelphia area. There’s no doubt that this event, on top of previous looting and the effects of the COVID-19 pandemic, will have a devastating impact on the already weakened small businesses. The most important takeaway following the destruction of Hurricane Ida is to continue lending a hand to the areas, small businesses, and families that are suffering; be there to help them rebuild from the rubble.